'Tis a funny thing, this notion of collecting records.... Especially for those of us who count ourselves among the audiophile cognoscenti, pursuers of that holy grail of good sound and all that goes with it... 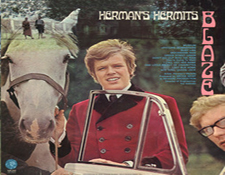 Many of us often spend large quantities of hard-earned dollars seeking out the best versions of new releases as well as re-issues of favorite albums from the past, often times music we grew up with and still cherish.

And while I will be the last person to criticize somebody for spending good money on a reissue, or even a pristine edition found at a pricey collectors shop, I do wonder at times if there is a breaking point for some of these things.  You know... that moment where the gap between the cost and the actual entertainment contained within said product being purchased is far too deep and wide.

The "value proposition," as its known in the marketing world...

From the television and movie making universe, a phrase has come into everyday usage -- "jumping the shark"  -- in reference to a wacky moment in the mid-1970s hit TV series Happy Days. In that episode, one of the lead characters (a lovable tough guy hoodlum named Fonzie) is thrust into a ludicrous situation which finds him on waterskis, in a bathing suit, and wearing his leather jacket while being pulled by a motorboat to jump over a confined shark. This was a defining moment where many agreed that the show had run its course and that the program's writers had run out of steam.

That said, I do wonder if there are some "jump the shark" moments in the audio world. Now, in writing this article, I mean no disrespect to any of the artists or the manufacturers or (especially) the people buying those items. But I do think it's interesting to take a step back and look at the big picture behind some of these releases and ponder: what were they thinking?

I will acknowledge that this opinion piece is purely subjective and that there may be some folks who really do want the best quality version of their favorite guilty pleasures at any price. Heck, even using a phrase like "guilty pleasure" can be misconstrued as derogatory. That isn't the intent of this article. In fact, you are reading the writing of a man who went all the way to Los Angeles from San Francisco in search of an SACD copy of The Carpenters' Greatest Hits (with its fairly stunning 5.1 surround sound mix on it!). So, I will never judge anyone negatively for what they like to listen to.

I even reviewed that Carpenters disc here on Audiophilereview (click here to jump to it)!

On a recent Record Store Day my music buddy Frank and I were chuckling when we saw the new release list included none other than Herman's Hermits and their 1967 psychedelic-era  album called Blaze. Frank defended the album, saying that it was actually pretty good and that I should check it out sometime; as I respect his opinion, this shut me up on this topic for a while and simultaneously pinned that recommendation to the back of my head.

Well, that time to check it out arrived a few months ago when I did I find one of the new edition copies of  Blaze in a discount section of one of my favorite local music stores - - 1234 Go Records - - a seemingly audiophile version of said Herman's Hermit's album, pressed on thick black 180-gram vinyl and spinning at 45 RPM. I knew there is also a fun colored vinyl version (clear, I think) out there as well, but ... well... the mind still reels a bit over the concept of an audiophile Hermans's Hermits release?

Don't get me wrong -- I love Herman's Hermits' early hits.They were a fine pop band out of the British Invasion and had many fun and memorable hits. This album, however, was made toward the end of their run as hit making machine so -- like many bands from that period -- they were stretching out in 1967, offering up a more creative and mature side to their music. 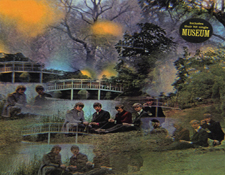 Since Blaze was only three dollars, I bought it and finally give it a good listen or three.  And true to Frank,'s recommendation, it's not a bad record at all.  It's actually quite enjoyable, if a tad forgettable in the context of everything else that came out that year. Its actually closer in feel and vibe to The Kinks' 1968 opus The Village Green Preservation Society than The Beatles Sgt. Pepper's Lonely Hearts Club Band, but all the touch-stones of the period are there including a "Penny Lane"-esque song about a place in London called "Green Street Green."  This album is possibly closer still in feel (and length) to The Beatles' Rubber Soul (from 1965, the US version especially!) in both its sound and directness, so if you ever liked singer Peter Noone's voice and the vibe of his band, do check this album out.

Getting back to that "jump the shark" factor, I still have to question whether this album really needed to be put out on a 180-gram, 45 RPM 12-inch LP selling for, probably upwards of $20- $25 when first released? I question this especially for an album that is a common sighting in most used record stores and thrift shops in the bargain bins for $1 - $2. Obviously the creators of this pressing liked the album so much that they assumed at least 1500 audiophiles would want to get it (that is how many were pressed according to the Record Store Day website).

Unfortunately, Herman's Hermits' fan base was most likely teenage girls and boys in the early 60s amidst that first wave of the British Invasion, many of whom probably owned their hit singles like "I'm Henry The Eighth, I Am" and "I'm Into Something Good."  Those are classic pop singles from the era. By 1967, Blaze was pretty much overshadowed by The Beatles, The Monkees, Jimi Hendrix and all the music coming out of San Francisco and Los Angeles that year.  The times were indeed a-changin'...