George Harrison would have been 75 years old on February 25th of this year and accordingly his estate has spearheaded a number of loving celebratory releases in his honor. Notably, the November 2002 The Concert For George tribute performance (recorded at Royal Albert Hall in London, approximately one year after his death and featuring a rainbow of rock 'n roll royalty) has enjoyed a new theatrical distribution, a reissue on Blu-ray Disc and super-duper deluxe edition boxed sets including first time vinyl release. It also marks the first time the entire concert has been released as an audio-only format -- several tracks from the performance were omitted from the earlier CD version, probably due to time constraints and sequencing considerations. 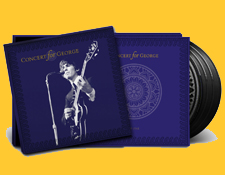 I've long enjoyed the Blu-ray of this concert (which apparently had gone out of print and become a ridiculously priced collector's item) so when the label approached me with the prospect of reviewing the vinyl edition, I welcomed the opportunity. As with many of my reviews of this nature I will take more of a compare-and-contrast perspective on this as all the versions of this concert have their pluses and minuses (mostly pluses, thankfully!)

To that point, its important to note up front that the original recordings of The Concert For George as first heard on DVD and subsequent Blu-ray editions always sounded remarkably good as modern digital multitrack concert recordings go.  With an army of stellar musicians on stage -- including at times three or more drummers and percussionists including Ringo Starr, Henry Spinetti, Jim Keltner and Ray Cooper -- it is a wonder that they were able to achieve as much detail and precision to the mix as they did, what with inevitable "bleed" between instruments and vocal mics. Indeed, if done correctly, that sort of natural sounding mix can be integral to the sound of a well made live concert recording -- the music is alive in every microphone.

The original Blu-ray disc version I am referring to here -- delivered in 48 kHz, 24-bit PCM Stereo (and 5.1 DTS HD Master Audio surround) -- sounds big and bright, but not annoyingly so. Given that the music is designed to be part of a viewing experience, the audience portions are appropriately loud in the mix when necessary. 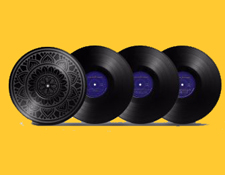 In general, the new four LP, seven-sided vinyl boxed set fares quite well but is no doubt a very different listening experience. The music here appears a bit tighter, perhaps a bit more focused and less Cinemascopic than the Blu-ray Disc version. The high end is reigned in a bit and in many ways sounds more enjoyable for a pure audio-only listening experience. It may be my imagination but it feels like the audience portion is mixed a little lower on the vinyl mix than the concert Blu-ray, which makes some sense if that is the case. The music comes across quite a bit more warmly on the vinyl which is particularly appealing on the large segments of the concert performed and conducted by master musician and Ravi Shankar's daughter, Anoushka Shankar.

The traditional music featured on the first part of the concert shines, with Tabla, Sitar, Sarod and other non Western instrumentation plus chanting vocalists coalescing into what may well become a fine demo for some of you out there in audiophile-land. The album-side length original work called "Arpan" sounds especially alive on the vinyl version. It is really wonderful to hear Eric Clapton letting loose with bluesy acoustic guitar soloing alongside the final chants; this segment is stunning to watch and is equally compelling on its own as a pure listening experience. 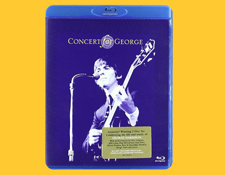 The 180-gram vinyl records on The Concert For George fare real well on rockers like Carl Perkins' "Honey Don't" (which Ringo sings). Paul McCartney's mini-set is stellar, tackling a rollicking version of George's Let It Be soundtrack blues, "For You Blue." McCartney's spectacular version of "Something" sends shudders down the spine, beginning with a touching Ukulele rendition before giving way to the full-on Phil Spectorian wall-of-sound full-band barrage.  Its worth noting that Eric Clapton's lead vocal blend remarkably well with McCartney's harmony on the later verses -- so much so, one wonders why they haven't collaborated more as their voices work really well together! The big acoustic guitars of "All Things Must Pass" are sparkly yet loving.

The epic, near-finale version of "While My Guitar Gently Weeps" is super dense sounding on the LP version coming at the end of an album side and with it all the challenges which can impact a recording appearing at that point in the disc. But it still sounds pretty great, especially when you turn up the volume on your amp -- but I did wonder whether that song might have been better served appearing at the start of Side Seven (which only has three songs on it).  The Blu-ray Disc version in comparison sounds quite a bit more open, but is also a lot brighter comparatively. So, again, consider the trade offs you may make in terms of the kind of sound you prefer. 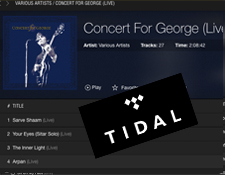 On Tidal, the complete version of the concert is available for streaming in 16-bit, 44.1 kHz CD quality. Included are the two comedy sketches by Monty Python's Flying Circus and the song "Horse to Water" (featuring Jools Holland and Sam Brown), previously unreleased in audio-only formats. Jeff Lynne produced all the audio on this set and he generally favors a more mid range-y flavor for his recordings -- accordingly, the digital streams here sound quite good overall. It is certainly fine for basic listening on home computer speakers. It is no doubt very handy being able to just put the show on and let it play from start to finish in the background.The acoustic numbers sound fairly warm and inviting. The more rocking songs take on a bit of angularity, but nothing raising any sort of big red flags to my ear.

Again, it really comes down how you like to listen to this music.  Any way you slice it, even if you are playing a highly compressed MP3 version, the performances here are what The Concert For George  is all about. There are not many great concert recordings of recent vintage -- at least that I can think of -- which have that compelling special sauce element that elevates the recording to legendary status.  I'm talking about a live concert performance which one never tires of listening, versions of the songs you want to play again and again. In its own way The Concert For George sits right up there with classic concert recordings from the 1970s such as The Allman Brothers at Fillmore East and The Grateful Dead at Great American Music Hall 1975 (called One From The Vault ) or even George Harrison's own Concert for Bangladesh.  All feature legendary performances by the artists, preserving  and delivering the magic of the moment to the listener.  The Concert For George has captured that magical electrifying musical lightning in a bottle for future generations to cherish.