A new album has just been released by the late Gene Clark, a founding member of The Byrds and a pioneer of Country-Rock music. This previously unreleased collection of lost post-Byrds recordings, Gene Clark Sings for You is out now on Omnivore Recordings. What is significant about this recording beyond its legendary status -- it had been rumored to exist for years among hard core fans -- is the surprisingly great sound and quality of the music. 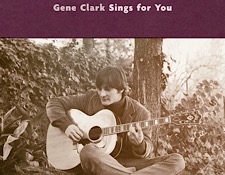 From the official press release, according to John Einarson, author of Mr. Tambourine Man: The Life and Legacy of the Byrds' Gene Clark (Backbeat Books), "Since word first spread in the 1980s about the discovery of these 1967 recordings on a rare acetate in Liberty Records' vaults, fans have come to regard Gene Clark Sings for You as nothing less than the Holy Grail of the singer/songwriter's extraordinary body of work."

I have been enjoying digital versions of the fourteen new songs on Gene Clark Sings for You via a download and Tidal stream. I hope to get a copy on vinyl at some point. For an archival release mastered from a disc source, it sounds quite wonderful all things considered.

Restored and remastered from a recently unearthed 1967 "acetate" (small-run test pressings designed for limited play reference listening by the artists and producers back in the day), much of the music on Gene Clark Sings For You is remarkable in scope. Most of the songs feature acoustic guitar as the rhythm bed propelled by very powerful, surprisingly aggressive (for the period and music style) drumming; some of this proto-country rock really does rock (which one can't always say about the genre).

But the addition of then-groundbreaking (for lack of a better phrase) baroque and psychedelic production touches like the use of a Mellotron elevate these borderline demo recordings to compelling spaces. Pushing this music near to future progressive rock territories emerging that year by bands like The Moody Blues and The Zombies, 50-plus years on Gene Clark Sings For You sounds quite timeless and yet somehow not of its time. 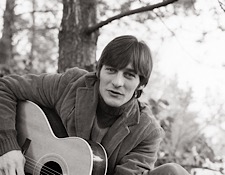 There is apparently some mystery about what this music in fact is. The liner notes reveal that the acetates of this music were distributed to various record labels for solo deal consideration as well as to other artists looking for new material to cover.  Some of it feels like music that could have fit on a number of later period Byrds albums. Even without the embellishment that might have happened if these recordings had been finished and compiled into an album back in the day -- notably the lack of electric guitar and signature riffs -- the production feels just right the way it is. This music is naked and raw yet tender and feeling; proof that less can actually be more.

Since we can't really speculate what Gene might have done to finish these recordings, the best thing to do is just kick back and enjoy them for what they are. Some of my favorites thus far include "That's Alright By Me" (which sounds almost like a lost Moody Blues tune from the period; I could easily imagine Justin Hayward singing this). The opening track, "On Her Own," has a great chorus about San Francisco, a melancholy reflection about seeking a girlfriend who left for the big city. The whimsical "Down On The Pier" features a circus-y (I think) calliope organ sound, creating a surreal sense of an introspective dreamer alone in a crowd.

In addition to the eight tracks from the Gene Clark Sings for You session, there are five previously unknown tracks from another 1967 acetate given to the band The Rose Garden for recording consideration. This new compilation also includes a previously unissued Clark demo rescued from a tape in the collection of John Noreen, member of The Rose Garden.

Gene Clark was a key singer, songwriter and founding member of The Byrds. He was the main writer of the original 1964-66-era of the band, penning signature hits like "I'll Feel A Whole Lot Better" and "She Don't Care About Time" as well as collaborating with Roger McGuinn and David Crosby on now legendary, ground breaking songs like "Eight Miles High."

Gene Clark Sings for You is a fine addition to this influential artist's recorded legacy. Its been worth the wait.