Review: Chicago VI Decades Live (This Is What We Do) on CD, Tidal

Live concert recordings of legendary jazz rock pop fusion band Chicago can be a special treat, especially when they feature recordings from the group's golden era between 1969 and 1977.  A fine new super deluxe boxed set from Rhino Records documents this period (and some more) very well across four CDs and a DVD.  Called Chicago VI Decades Live (This Is What We Do), most of the collection focuses on the period when founding member and lead guitarist Terry Kath was alive (he died tragically unexpectedly in early 1978). 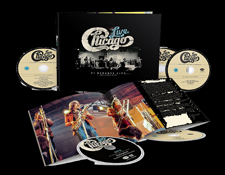 For many of us long term old fans of Chicago, Terry was the heart and soul of the group and this factor is readily apparent on the two CDs documenting their entire smoking crisp soundboard recording of their headlining performance at The Isle of Wight festival in 1970. The third disc of rarities traces performances from Paris, France in 1969 to Oakland, California in 1977. There is even a DVD of the band's performance on Germany's Rockpalast TV program (from February 12, 1977) which, while offering archival video quality imagery, sounds quite good in crisp LPCM Stereo sound (the VLC media player on my computer tells me that the audio is in 48 kHz, 32-bit resolution).

Ultimately this set is about the performances -- so don't go into this expecting audiophile bliss folks; these are archival concert recordings drawn from a variety of sources, albeit some sounding very good to excellent. Here you really get a sense of what a great band Chicago was at its peak. You also get a sense -- from the unfortunate Disc Four of the set -- just how big a hole Terry Kath's passing left in the band's heart. Admirably, the band rebounded after his passing with the only non-numerical entry in the group's catalog -- the weakly titled Hot Streets -- and while they were still a good live entity, you can feel the transition as they become a very different band. The fire that Terry lit under this group was gone and this becomes increasingly apparent as the disc meanders down into cover tune medleys in the late 80s and the so-called "Big Band" period where they offer up Chicago-fied versions of swing era tunes from the 1940s such as "In The Mood" and "Don't Get Around Much Anymore." 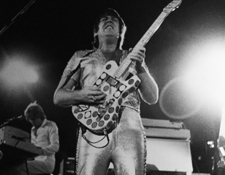 But.. y'know... just one weak disc among four others still makes for a compelling live retrospective of the band (especially given the reasonable price of this set... more on that in a moment). Frankly, the producers could have stopped with 1977 and made this a strong study revolving around Terry. Instead, it is an imperfect set, yet it still delivers enough of interest for the hardcore fan (of which there are still many around the world!) to warrant your purchase.

Chicago VI Decades Live (This Is What We Do) includes much memorabilia and photos and comes in a lovely hardbound book styled case, so for under $50 (that is for four CDs and a DVD) it is really a very fair deal.

Some of you of course may be wondering if this is streaming up on Tidal?  That answer is a resounding "Yes!"  So you can preview the set both in standard CD resolution as well as MQA format -- you can find that stream by clicking here. A curious note there however: the MQA version plays at 44.1 kHz but at 24-bits. Both versions sound pretty good, but admittedly not all that different, the 16-bit version perhaps being a tad brighter on the cymbals... but I'm admittedly splitting hairs here. Again, you'll want to explore these recordings with an open mind to hear what a great live band Chicago was at this time, not to test your audio gear. This set is all about the music, folks. 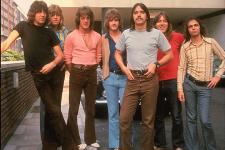 That said, there are also some other choice period live recordings up there on Tidal worthy of your attention including the fine Live in Japan set from 1972 (which many feel is a better representation of the group than the four disc Carnegie Hall concerts from the period).  A more recent show from 1975 live in Largo, Maryland is also up there on Tidal, so there is no shortage of tasty live Chicago out there for fans these days.

Now I can only hope that the band starts a deeper archival release series including (I'll admittedly say, selfishly) the concert I saw them play with The Beach Boys in 1975 at New York's Madison Square Garden. One of my first rock concerts, that event remains etched into my mind, especially as they were breaking out material from their then hot -- and to this day still my favorite Chicago album -- number VII. What a lasting memory: Chicago played for a couple hours it seemed and then The Beach Boys played a full set. Then as I remember they played together. It was a drag as we had to leave while the show was still going on to make the last train back to New Jersey, so I'd really love to hear what that show sounded like.  Guess I'll just keep on wishing maybe one day that dream will come true.