One of the cooler jams to come out this past Record Store Day (RSD) is not by one particular artist but from a record label called Jazz Dispensary, a very well curated collection called Soul Diesel Vol. 2 which takes you on a journey of remarkable consistency, leading one to almost forget there are multiple artists performing this music. 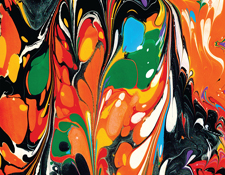 I don't know a whole lot about the specific music industry players behind this label -- it is copyrighted to Craft Recordings, a division of Concord Music -- which came out of the gate on an apparently curious (and perhaps timely) mission. For example, consider this line from their press release for this new release: "Soul Diesel Vol. 2 is the second installment from the Soul Diesel "strain," a distinctly potent brand of smoldering soul-jazz made popular by 2016's Record Store Day box set offering, Jazz Dispensary: Cosmic Stash, in which varying styles of jazz (e.g. soul-jazz, jazz-funk, fusion, etc.) were compiled to compliment the effects of Indica, Sativa, and Hybrid cannabis strains."

So while I can't personally comment on how this album will play out as a stoner spin (if you will)  -- no offense to those of you who rely on Marijuana for medicinal purposes -- I do know that Soul Diesel Vol. 2 sounds pretty great and is a fun selection of grooves from label properties owned by Concord Music these days including Fantasy, Prestige and Galaxy Records. If you like the jazz of somewhat more modern players who crossed over, into and around the jam band communities -- ie. Medeski Martin and Wood, John Scofield, etc. -- you may well dig these early influential sides which Jazz Dispensary has queued up for you. 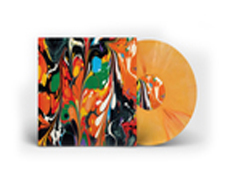 I have no doubt that these tracks were highly sought after by collectors of so called "Soul Jazz," a popular evolution of jazz which began in the 1950s and peaked in the late 60s (arguably, paving the way for the next wave hybrid of Jazz Rock Fusion). In lay terms, this stuff is often based on funky, repetitive grooves which listeners can dance to, but also which performers can enjoy the joy of improvising over.  Cannonball Adderly, Ramsey Lewis, Jimmy Smith and many others played in this arena, often bridging the gaps with funky Hammond Organ and soaring sax and guitar solos. It's fun stuff, legit jazz to which you can tap your toe ... or shake your booty! I was pleased to receive a copy of Soul Diesel Vol. 2 for review and I'm not disappointed. The fun peach swirly colored vinyl is, happily, quiet and well centered. And to my original comment, this music is thoughtfully compiled, choice grooves and jams which ebb and flow off of one another.  So much so, you almost forget that there are seven different artists here! 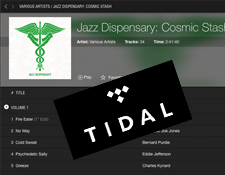 So far, some of the standouts for me include Rusty Bryant's groovy suave "Cootie Boogaloo" (with king-of-grooves Bernard Purdie on drums!). Idris Muhammad's 1971 slammer called "Wander" has a pretty killer drum solo in there with some amazing Tom Tom slamming going on.  Some of the connecting glue in this release is none other than legendary recording engineer Rudy Van Gelder, whose name graces five of the seven tracks here. Cal Tjaders' "Mamblues" hails from the surprisingly elusive Fritz The Cat movie soundtrack album (I have a copy!).  This collection also includes a sweet 1969 single by none other than Jerry Garcia's (of The Grateful Dead) frequent early 70s collaborator, the great organist, Merl Saunders. Called "Soul Grooving," you can hear this track at this YouTube link while watching very trippy looping animation of the melty cover art. 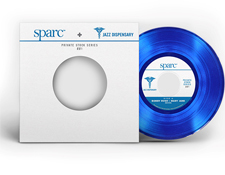 Speaking of singles, Jazz Dispensary has also started a sort of custom series of rare reissues of probable interest to fans of groove oriented soul and jazz recordings. Called "The Private Stock Series, these releases are also cannabis oriented in that they seem to be issued in conjunction with Sparc, an apothecary here in Northern California. They sent me the first in the series and that includes another great jam by Rusty Bryant ("Fire Eater" which appeared on Vol. 1 of Soul Diesel) and a track by Bobby Rush called "Mary Jane' (I'm pretty sure I have an original copy of that in my collection!). From their press release: "'Fire Eater' features an often-sampled break from drummer Idris Muhammad that listeners will easily recognize and of course, the incendiary sax lines of Bryant himself."  Only 500 copies of this single were pressed, at Jack White's Third Man Pressing, in Detroit, MI.

Some smokin' stuff here (pun intended)! Probably the only question I have about this set relates to a claim on the hype sticker on the cover which says it is 180-gram vinyl; I don't know for sure, but my copy feels more like a standard weight LP. This isn't a bad thing for many of us, but I just wanted to give a heads up to those of you who care about this sort of thing.

If you can't get your hands on the vinyl of Soul Diesel Vol. 2 but want to hear the music, you can conveniently find all the tracks spinning with groovy animation up on Jazz Dispensery's YouTube playlists. You can also find the contents of their whole four LP collection -- called Cosmic Stash -- streaming up on Tidal. Four sides of more of this sort of groove oriented instrumental jazz fueled soul jamming.  I suspect that eventually we'll see Soul Diesel Vol. 2 up on Tidal, but for now these other Jazz Dispensary streams will keep most of us blissed out and grooving.

Regardless of how you spin these sides, these recordings will spark your spins with positive vibes and sweet soulful grooves. And isn't that what its all about?