My entry point for becoming a genuine fan-boy of hard rock band Queens of the Stone Age (QOTSA ) -- and by "fan" I mean that tipping point where I wanted to "go deep" on them, getting all the albums, singles, EPs and such -- happened around the time of their last album. Prior to that release, I had Songs for the Deaf and Rated R on CD, so I was primed for what they were about but it was 2013's ...Like Clockwork that really sold me on the group and its songwriting. 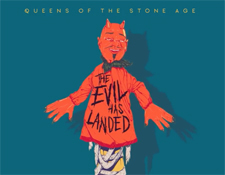 That record nailed me in the best possible way: great songs, compelling production, ear-wormy hooks, ballsy righteous rock riffs and happy surprises. You can read my review of that album from 2013 by clicking here. For those of you hardcore fans reading this, please don't cringe when I say this but ... Like Clockwork was for me akin to that time in the early 1990s when I first heard Pearl Jam's Vitalogy -- it resonated on many levels and made me appreciate what the band stood for (I was not a fan of Ten, btw, but that is another story entirely).

Listening to QOTSA's new album Villains, it is pretty clear to my ear that this is a more direct, and perhaps intentionally commercial, record than ... Like Clockwork with subtleties and points of influences that are perhaps more immediate to the listener. Those of you who are already among the QOTSA-converted probably have Villains by now and I suspect like it pretty much, if not a whole lot (though, I have heard some mixed initial responses from friends who were surprised by it, but for whom it seems to be growing on with repeated listens).

With that in mind, it is fair to say that this review is more for the QOTSA-uninitiated...

Dare I say it that there is more sense of homage on this new album than I've picked up on in the past? Purely speculation on my part, that isn't a bad thing if there is, mind you. In fact, I kind of like that sort of comfort level when listening to a record such as this -- cosmic touchstones and connecting points on our stairway to heavy metal heaven. Again, for the benefit of anyone who may not be familiar with QOTSA, I'll explore some parallels I'm hearing -- and please note: your experience may vary! -- to give you an idea of what you might hear: 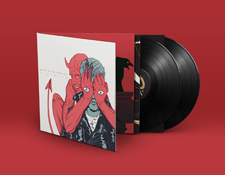 There are some pretty sweet Led Zeppelin-like moments on Villains (which make sense, especially given that QOTSA leader Josh Homme played in Them Crooked Vultures, a super-group of sorts with Foo Fighter Dave Grohl and Zeppelin bassist John Paul Jones). "Domesticated Animals" feels almost like a reinvention of "Hots On For Nowhere" (from Presence) while album opener "Feet Don't Fail Me" feels akin to "Trampled Underfoot" from Physical Graffiti (at least once the song really kicks in).  "The Evil Has Landed" reminds me of "The Ocean," (from Houses of the Holy) with its catchy syncopated signature drum-guitar hook. "The Way You Used To Do" sounds sort of like what I imagine might happen if Cream's Jack Bruce fronted ZZ Top (think 1973's "La Grange" or "Thunderbird" from Fandango) after drinking a pot of coffee. "Un-Reborn Again"makes me imagine Iggy Pop fronting a reformed Mott The Hoople playing Scary Monsters-era Bowie arrangements. "Head Like a Haunted House" is one of my faves thus far on the album, more of a more manic, punk flavored tune that falls somewhere between The Dead Kennedys and The Buzzcocks.

If I have one complaint, however, it is from an audiophile perspective. The vinyl pressing is thick and quiet and all that good stuff folks such as yourself and myself tend to appreciate (180-gram, pressed at Pallas, audiophile-grade inner sleeves, etc.).  That is all fine and good. But the recording contained within those grooves sounds pretty crunchy (if you will) to my ear -- very digital flavored.  In fact, it was so digital flavored I had to compare it to the FLAC (16-bit, CD quality) download  and then pulled out my copy of ... Like Clockwork to see if that was simply part of the sound of QOTSA. Its not.  ... Like Clockwork was a great sounding hard rock record, spinning at 45 RPM.

The FLAC version of Villains is pretty crunchy too but I am wondering if the combination of that factor combined with any additional mastering required for creating the vinyl pressing resulted in that sonic texture?  And please note that is a question, not a statement. I even went back to my copy of Them Crooked Vultures and that sounds pretty tremendous too. No, I think its simply the overall "sound" of the way this vinyl record was either produced or manufactured and its a sound I'm getting used to upon repeated listens.

Perhaps. I'd understand that if it indeed was an intentional sonic design of the album overall, to try and help QOTSA fit in with the sound of radio and other popular songs getting play-listed around the world in 2017.  That is a tactic which has been practiced in the music making world at least since the dawn of rock 'n roll in the 1950s, perhaps earlier.

So lets just say that Villains sounds... different... while still sounding familiar like the QOTSA album we might expect.

That factor should not sway you from buying Villains, Dear Readers. But do set your expectations accordingly that this isn't going to be a hard rock album with demo-worthy fidelity like Led Zeppelin II or Jeff Buckley's Grace or even QOTSA's last album. 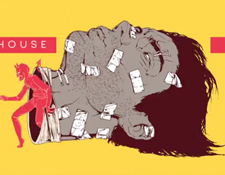 It is worth noting that the packaging on Villains is lovely, boasting particularly wonderful artwork, done by the same artist who created the striking images for ...Like Clockwork : Boneface. It's really cool, for those of you who dig images of snickering devils 'n such.

Villains comes in two versions, a deluxe edition (again) on 180-gram vinyl pressed at Pallas with a series of suitable for framing art "album slick" sized graphics for each of the songs on the album (with lyrics on the other side). There is also a standard -- but still limited edition -- issue of the album with alternate art work.  While I am happy to have purchased the deluxe edition for the special art work and such, I suspect if you just want the music than you'll be fine with the less costly alternate art standard edition on vinyl or CD.

So, get your lighters ready, kids. These new songs will probably rock your world when they play them live in concert (they are on tour now).