So... I got pulled in again to the swirl of Beatle-fan buzz with the latest re-re-reissue of Sir Paul McCartney's classic albums on colored vinyl, pressed in Germany and mastered at Abbey Road Studios in England. These were made available only at independent music retailers in conjunction with Record Store Day and were reportedly a very limited edition run. I was at one of my favorite music stores, 1234 Go Records (here in San Francisco and Oakland, California) when my music buddy Frank told me how good he thought the reissues he'd already picked up were sounding...  so I figured I'd take a chance.  I chose two to start with, one of them my favorite Macca album, a record I know intimately having listened to it since I was a little kid when it came out (I bought it when it first came out!): RAM. I also picked up the groovy-looking two-color red-yellow version of Venus and Mars, an album which to my ear has never sounded particularly great on the US LP and CD pressings I've owned over the years (this one sounds better but its still not ideal... but that is another story entirely...). 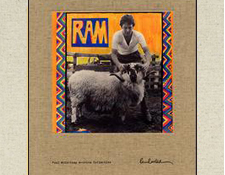 For this article, however, I'm going to just focus on RAM since I know the record so well and also since I previously reviewed the super deluxe edition boxed set -- at a now defunct publication but that review is still up on the web -- which included 96 kHz, 24-bit downloads (in compression-limited and unlimited versions).

I have long ago abandoned trying to find a good sounding, quiet, well-centered US pressing of RAM in mint condition. I have an ok condition original UK pressing which gives me a good idea of how this album probably should have sounded had the US pressings been real good. I tried a later 70s Capitol Records repressing which was just OK and I seem to have lost my Columbia era pressing which I remember sounded pretty good. But really, how many of these things do I really need to have?  (Hardcore fans would say: "all of them!").  Especially since the 96 kHz, 24-bit unlimited download is so good and as I've discovered that I can "free it" from my hard drive by burning the files on to an audio-only DVD for easy playback via my Oppo universal player (more on that later).  And for convenience while connected to the web, I can stream the album via the Tidal music service in 96 kHz, 24-bit MQA format. 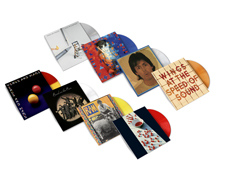 As 21st century vinyl pressings go, the new reissue sounds pretty great. The vinyl is quiet and well centered. There is a nice sense of soundstage and details such as the strings on "Uncle Albert" sound lush. The xylophone (and / or combined vibraphone) sound there suffers a bit on vinyl, initially sounding sort of .. well... for lack of a better phrase, I'll invent a word and say "plinky" as opposed to how it delivers a more pronounced, more true and bell-like ringing tone on the 96 / 24 high resolution download.

Re-listening to the high resolution download anew for the first time in a long while, it fares well and in many ways surpasses the new fangled (probably digital at some point in the food chain) incarnations. The thunderstorm effects on "Uncle Albert" are huge and the drums very detailed. You can hear rhythm guitar parts on the latter part of the song which are more or less buried on LP versions of the song. For example, leading into the second half of the song -- the "hands across the water" segment -- listen for little chugging bits which sound like Sir Paul is tapping out a drum-like rhythm on the strings of his guitar as a warm up to the beginning of his strum.  That detail is quite pronounced and very audible on the high resolution download while on the LP it more or less gets lost.

Tracks like "Smile Away" at the end of side one have never fared particularly well on the vinyl versions of RAM, suffering most from the end-of-side grooves, ultimately sounding a bit distorted. I suspect it is a bit of a challenge for even a good cartridge to reproduce the music in those grooves as there is a lot going on in that track -- it is very dense. The new vinyl does sound quite good when you turn up the volume on your amp a bit.  But that song sounds much clearer on the 96/24 download, with the rich fuzz bass jumping out at you more readily as do punchier harder rocking drums, clean crisp cymbals and tight harmonies breathing with a nice sense of air around them. 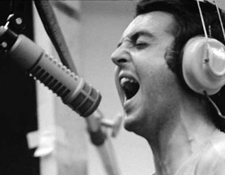 The Tidal version of these tracks do quite well, coming in just a bit under the unlimited download version, comparatively. How is it different? Hmmm.... well... it is not bad and certainly serviceable for basic listening but the instruments sound a little more, shall we say, digital on this than on the download version (which itself sounds a bit more digital than the old analog UK pressing, but that is inevitable). Things just sound a bit more angular on this version overall, making it less definitive from my perspective. "Smile Away" gets a little gnarly sounding there but "Heart of the Country" sounds real nice, with a nice presentation of the acoustic guitars in particular.

Your experience may well vary!

Anyhow, I could go on but I think you get the point of this non-scientific exercise by now, Dear Readers, hopefully getting some sense of whether you might want to invest in a new vinyl reissue again.  If you don't have RAM on LP and like colored vinyl or simply want a nice imported pressing, the new editions sound good (it will be available on standard black vinyl apparently, so look around!).  And of course if you can find a clean original UK pressing of RAM, that is a good way to go, arguably the definitive version -- I am still looking for an upgrade copy myself.

If you don't mind being tethered to the Internet and have no desire to own a physical product, the subscription based Tidal program may be a good option for you, especially when using their MQA codec versions.  If you are a hard core Macca fan, you probably already have the fine boxed set with the high resolution downloads, but I suspect many of you may have overlooked listening to them in the past.  Do check them out! I have burned my copy onto a DVD for easy playback when and where I want to listen, so I don't have to be tied to my computer. Again, if you want more insight on that process, please click here to read my article on that topic -- it was a revelation to me earlier this year.

Looking at the big picture here, there really are many ways to enjoy your favorite music these days. The nice thing about all this variety -- from vinyl to high res download to DVD and Blu-ray Disc -- is knowing that old favorites can still sound fresh on whatever format you might want to listen on.