Here in America we have a somewhat skewed version of the works of Mike Oldfield, an artist who in 1973 quite literally burst on the music scene with an album called Tubular Bells. That recording -- and its spellbinding album cover -- became almost immediately iconic. Something of a watershed or benchmark in the world of progressive rock music, when a section of Tubular Bells was used in the soundtrack to the hit horror film, The Exorcist (extracted as single played a lot on the radio) the album and image became even more ingrained in the American mindset. 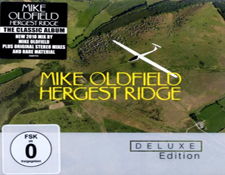 However, fame is fleeting and the American public has always been a kind of fickle holy grail for most artists to win over. Gaining our ongoing support is crucial or you are essentially toast on these shores. Post Tubular Bells, there was critical acclaim, but for the most part Oldfield became virtually invisible to the average American.

Meanwhile, in England and Europe, Oldfield was revered, playing stadium concerts and placing hit records in the charts (hit recordings that were most decidedly not the kind of thing America was consuming at the time, for the most part).  This is important detail to understand before I even dive into the reissue reviews of some of these later albums which, while available here in the states, weren't exactly top of mind for many people.

As a long time fan of Oldfield's music, I have long wanted to get my hands on the deluxe three-disc reissues he started putting out around 2009. These multi disc sets frequently included 5.1 surround sound mixes (alas, on a DVD, not a DVD Audio or Blu-ray Disc). Now, I'm not sure if there were distribution issues or problems that ensued with the mergers of major labels around time of their release in 2010... or problems with the world economy in general ... but the reality is that it was often hard to find these multi-disc sets in the stores...And, when I did see in them, they were often quite high priced. They were pricey on-line as well, so I had some trouble justifying the purchases beyond the Tubular Bells reissue, which I did get early on and it is wonderful, by the way!

Perhaps stupidly, I decided to wait until I would see them on sale at some point. And thus I plead guilty as charged to be one of those fickle Americans I talked about above. My bad.

Anyhow, time being what it is, prices seem to have come down on these sets significantly and the economy is doing a bit better so I sprang for a few of them when I found them for less than $15 a piece.

Hergest Ridge was Oldfield's first release after Tubular Bells and I can see how it may have confused some listeners at the time (especially fickle Americans!!). While it does feature Oldfield's soon-to-be-trademarked multi-track overdubbed playing of most of the musical parts on it, and it does include lovely sweeping melodies that build to something more grand, Hergest Ridge is a much more mellow and introspective listening experience. It is almost proto-New Age in its flavor, presenting subtle variation and themes that almost pick up where Tubular Bells left off, but keeping to a pastoral ebb and flow. Hergest Ridge has more of a slow grandeur to it, which as it turns out (according to the charming liner notes in the very detailed booklet included) was a direct reaction -- a retreat even -- to the international acclaim foisted upon Oldfield upon his debut. Consider that the guy went from virtual unknown (he'd been guitarist in Kevin Ayers' band back in the day) to an internationally acclaimed superstar overnight. Richard Branson began his Virgin empire on the back of Oldfield's release (Tubular Bells was the label's first ever release!).  So the guy, who was at that time somewhat introverted, had a right to pull back a bit and get his head together. 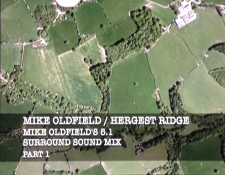 He did this at a place after which the album is named. According to the liner notes, Oldfield moved to the countryside and would fly radio controlled gliders up on a nearby hill called Hergest Ridge. Thus, when you view and listen to the 5.1 surround sound mix via your home theater system you will see blissful on-screen animated scenes placing you the viewer high above the English countryside as beautiful gliders soar around -- and sometimes whizz right by -- you.  Its really quite wonderful.

In the new surround mix Oldfield brings you into the heart of his world right from the start with a quite lovely immersion experience right from the get go. Bells appear in the front channels while haunting Fife-type sounds flow around you in the rear surrounds. Mandolin notes criss-cross the room from the rear left to front right.  Little melodies trickle like a babbling brook introducing new instruments and ideas from ripping-but-controlled Robert Fripp-like electric guitar distortion to plaintive oboes and muted horns.