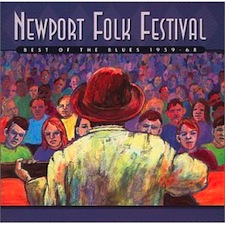 Before there was Farm Aid, Telluride, or even Woodstock, there was the Newport Folk Festival. Begun in the late fifties, this yearly gathering molded and defined a generation's tastes in music. It was the all-star event of roots music. This pair of Vanguard three CD sets, one for blues and one for bluegrass, let us hear what some of the greats sounded like when they were on top of their game.

The Bluegrass box features Hylo Brown and the Timberliners, The Stanley Brothers with the Clinch Mountain Boys, Lester Flatt and Earl Scruggs and the Foggy Mountain Boys, Jim and Jesse and the Virginia Boys, Don Stover, The Lilly Brothers with Don Stover and Tex Logan, Hazel Dickens and Alice Gerrard, and the father of Bluegrass, Bill Monroe. The Bluegrass Boys performed behind Bill for this 1965 set included Peter Rowan on guitar and lead vocals, Tex Logan on fiddle, Don Lineberger on banjo, and James Monroe on string bass. While some of the material on this album has been previously released, sixteen tracks that have never before seen the light of day. Since bluegrass is primarily ensemble music that makes extensive use of improvisation, studio albums, especially from the mid-60's, rarely capture the true spirit of the music. These Newport performances offer us a priceless glimpse of what these bluegrass pioneers could do when playing live before an appreciative audience.

Since so few of these original "first-generation" blues players are still with us today, the only way to find out what they sounded like is through recordings. What is most remarkable is not how "primitive" or "funky" they are, but how sophisticated their guitar work is. Listen to John Hurt on "Stagolee", or Mance Lipscomb doing "God Moves on the Water". These guys were nothing short of amazing.

Tom Vickers, who produced the Blues CD, and Fred Jasper, who handled the Bluegrass CD, are to be commended not only for the overall packages, but the fine attention to detail throughout. The album notes on these CDs are both entertaining and informative. Two different mastering engineers, David Glasser for the bluegrass, and Jeff Zaraya for the blues, managed to preserve all the fidelity available from the original analog tapes. I especially liked the fact that they retained all the low-frequency information such as footfalls and stomps that helps to make the music vibrant.

If you are a serious fan of either bluegrass or blues you can't consider your collection to be anywhere near complete without these CD's. They are as essential as air or water.