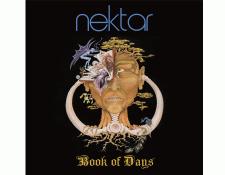 When Nektar's 2008 album Book Of Days came out on CD, I was quite seriously underwhelmed, let down even. The album felt rushed and unfinished somehow, especially after the glorious 2004 comeback album Evolution.  I knew that there had been challenges for the band at that time and they were doing a lot with their website, trying to tour and keep things afloat. So I didn't gripe. But I admit I didn't play the album a whole lot.  When I finally got to see Nektar in 2011 (twice!) in Southern California, they played some songs from that, their then-still-most-recent release and it sounded real good. So, I went back and listened some more. The songs were good but the production felt off somehow. It felt flat and hollow. Was it unfinished? Was it not mastered properly? 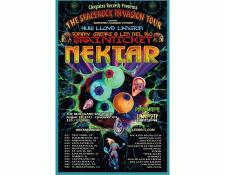 One of the two concerts I saw (the Los Angeles show) was subsequently released on a quasi-low budget DVD set which reaffirmed that these songs could sound good! More on that DVD in a moment.

Fast forward to 2020 and most of us are in some sort of Covid-19 stay-in-place self quarantining to try to flatten the curve of the virus. Amoeba Music and many other stores are doing fundraisers to keep their virtual doors open and staff employed. So I got on the Amoeba website to order some things in support and was pleased to see a couple releases from Nektar I didn't have.

First up is the vinyl debut of that 2008 album Book Of Days which came out late last year.  Within two songs I could tell it sounded much better than my original CD. Remember that hollow sound I mentioned earlier -- it was a decided lack of mid range and low end that killed that CD for me -- the drums are tinny and the guitars are brash sounding. 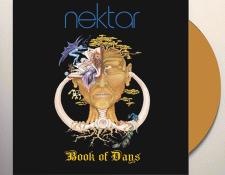 As a whole, the recording plays more tightly -- maybe it just needed that bit of added compression which happens in vinyl mastering to punch up the the recording.  I don't know... Whatever the case, while the album as a whole isn't as finely tuned as Evolution was production-wise, this vinyl version of Book Of Days sounds night and day better. The bass is thicker and punchy.

Roye Albrighton's layered up guitars are crunchy and ballsy. Ron Howden's drums are propulsive, especially feeling the kick drum pushing some air out of my speakers. Even though this is likely a digital recording at its root, it sounds worlds better than the CD or the streams I've heard on line (sorry Tidal and Qobuz). 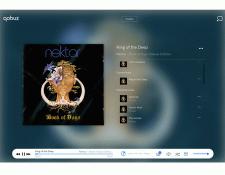 Now I can appreciate a funky track like "Where Are You Now." "Wait," you say... what's that? "Nektar isn't funky?" I disagree. A slightly funky groove feel has always been one of the distinctive details setting guitarist / composer Roye Albrighton apart from some of his peers, well ahead of Pink Floyd's dabbling with it on The Wall. Heck, prog fan Sherman Helmsley even snuck in a Nektar tune into the set of his hit '70s sitcom The Jeffersons (really! dancing to "Show Me The Way" from 1974's Down To Earth... click here to see that clip).

Even the cringe-worthy-titled  -- but ultimately rocking -- "Dr. Kool" rocks real hard on this two disc gold colored vinyl set. The standard weight LP happily sounds real good for the most part, playing quietly and without warps. There is some surface noise which oddly crops up at the very end of two sides so not sure what is up with that; fortunately the songs were over when it appeared in the run out groove but still it was somewhat surprising. 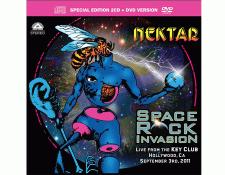 Perhaps the only issue is one side seems a bit off center causing a wee bit of periodic floating of the music in and out of key.  Its a minor nuisance that I can cope with, especially when the acoustic guitars on "Lamorna" sound so sweet.

Going back to the live album I mentioned earlier-- called Space Rock Invasion- Live at The Key Club -- I'm glad its been reissued. The DVD looks pretty much the same as the original version -- very darkly lit to emphasize the psychedelic projection stage lighting effects which are excellent.

The 48K, 16-bit Dolby Digital Stereo soundtrack sounds remarkably good all things considered -- especially given they were playing a one off night in a hard rock club in LA at the end of their tour. 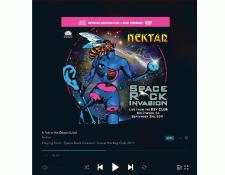 The nice treat for me is having this show on a CD which is handy for listening separate from the DVD.  I've found the album streaming on Tidal (click here) and Qobuz (click here) and both sound quite nice and full all things considered.

While there you might want to explore some of Nektar's many live and studio recordings which can be found up on the streaming services. If you are new to Nektar, I will recommend some to check out for starters (click on either Qobuz or Tidal in parentheses after to jump to the respective versions). 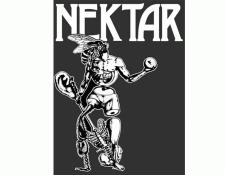 Nektar went through many changes but while Roye Albrighton was in the band and alive, it never lost its sense of melody and adventure.  Fortunately all his grand music is still readily available for future generations of fans to discover.