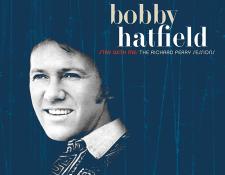 I have to admit that the appearance of a 1971 Richard Perry-produced archival release by Righteous Brothers singer Bobby Hatfield caused my eyebrow to involuntarily rise when it came in the mail from Omnivore Recordings. But... on a recent trip to LA I brought along the pre-release CD of Stay With Me: The Richard Perry Sessions to explore while driving up and down the California coast. I had some big surprises and I really quite like it a lot!

More on those surprises in a moment...

First, for those of you who wondering who this Hatfield fellow is, he was one half of a duo called The Righteous Brothers which had a string of huge pop music successes in the early 1960s, some produced by Phil Spector (ie. The Ronnettes, The Ramones, John Lennon, George Harrison, The Beatles, etc.). Some of you may know Hatfield's voice from The Righteous Brothers' song "Unchained Melody" -- which is essentially a Hatfield solo track -- that was used in the hit 1990 film Ghost.  Others of you may know"You've Lost That Loving Feeling," arguably one of their biggest hits ever alongside "(You're My) Soul and Inspiration."

But as the 60s moved on, The Righteous Brothers' style didn't really change with the times and the group increasingly became less popular as rock 'n' roll got harder and the soul funkier. It really wasn't until Hall & Oates emerged in the 70s that the whole notion of so-called "blue eyed soul" became a viable thing again.

Now while the other Righteous Brother, Bill Medley, had a number of solo albums out in the late 60s I can't remember ever seeing one from Hatfield. Turns out he only completed one in 1971 which stalled upon release due to label problems back in the day. 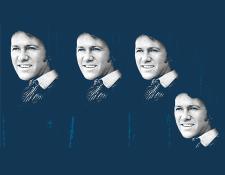 Subsequently there was an attempt pair Hatfield with legendary-producer-in-the-making Richard Perry, the man who put Tiny Tim, Harry Nilsson and even Paul Williams on the musical map.

And that is what we are exploring here today: sessions recorded in late 1971 at Abbey Road Studios with a Beatle-flavored virtual supergroup. This album features Ringo Starr on Drums, Klaus Voorman on Bass (who played on John Lennon and Nilsson's records in addition to creating the cover art for the Revolver album). Al Kooper (Blood Sweat & Tears, Lynyrd Skynyrd) is on Piano and Guitar while Jim Price, Bobby Keys and Chris Stainton from Joe Cocker's Mad Dogs & Englishman band fill out the saxophones, trumpet and organ parts respectively.  This is one killer band!

And you know what?  Even in this raw unfinished form here, a lot of these tracks sound quite wonderful!   The Beatle connection goes a step further with two covers of George Harrison songs: "Sour Milk Sea" and "What Is Life?" On the former, this is the best version of this song I've ever heard (Jackie Lomax recorded it on one of his Apple Records solo albums) and the soulful RnB-flavored take of the latter is quite brilliant -- I would love to hear Eric Clapton do a version like this actually.

One track on Stay With Me: The Richard Perry Sessions in particular stuck out as I was listening:  "Oo Wee Baby I Love You."  I played the song over and over and over, each time getting more and more amazed that they even dared making something like this. You see, the arrangement of this song gleefully lifts its groove and signature motif / hook from The Beatles' smash swan song "Get Back."  When Ringo shifts into the same shuffle he used on the hit recording there is just no question of the reference being made -- its so blatant, I am actually surprised it got released at all without the publishers raising a hissy fit or something (maybe they did!).

Whatevever. That was then. This is now and this is a cool release. It is a lost Beatle-related session that even my deep Beatlemania buddy Frank didn't even know about! 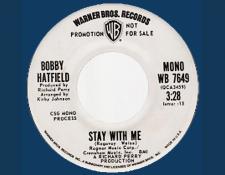 At the end of the day I can kind of see why the album didn't come out because it is ultimately a bit erratic. Some of the songs are not quite in the optimum key for Hatfield so you can hear him kind of straining at times to pull off his often jaw-dropping performances.  Don't get me wrong, they sound great. But they might have sounded even better in a different key.

There's a lovely interpretation of the classic Cole Porter song "In The Still Of The Night," but it doesn't quite fit in with everything else they were recording here.  So, as an album a listen it might've been a little inconsistent had been released.  But this track is gorgeous in its own right.

Still, it's a bit of a crime that this music went missing for so many years as it sounds great even just listening on standard CD (no vinyl or high res version planned as far as I know, at least at this stage).  I get sad to think that the artist probably did not get any sort of benefit out of these recordings. And of course there is always that creepy feeling gnawing away in the back of my head wondering why this music is suddenly seeing the light of day now, nearly 50 years after the fact? Why didn't it get released when the artist was alive?

I guess we'll have to just chalk it up to a different time and place.

At least this music is coming out now for all to enjoy!

All this said, if you are a Beatle fan or a Righteous Brothers fan, you need to get Stay With Me: The Richard Perry Sessions.  If you want to preview the album, Omnivore Recordings has posted a nice trailer you can hear/watch (click here). The two original singles are out there as well which you should check out (click here for "Ooo Wee Baby" and here for "Stay With Me").