So, some of you may have heard about -- and perhaps you may have actually been there to hear -- the recent one-off listening event sponsored by Dolby Atmos and Universal Music celebrating The Beatles' 50th Anniversary of Sergeant Pepper's Lonely Hearts Club Band. Held at select theaters nationwide, free passes were distributed via the Internet (you had to register) for an exclusive playback session featuring the whole album newly mixed into Dolby Atmos multi-channel surround sound. 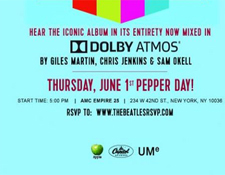 Yes, you read that right. A listening session. A free listening session. In a high-end, state-of-the-art, Dolby Atmos-equipped movie theater. Apart from an introductory video, there were no visuals presented with the music. Just the full album presented start-to-finish in a very comfortable theater environment with the lights turned down low.

If you weren't even aware that Sgt. Pepper has been remixed into surround sound (and fabulous new stereo!), you might want to catch up by reading my prior reviews (a three part series) on the recently issue boxed set. You can easily click through to the reviews via links I have embedded here for the first part (on the 5.1 surround sound mix) and here for part two (which discusses the stereo).  Both versions of the new remix of Sgt. Pepper present exciting new ways to experience one of the most influential recordings and overall pop art statements of the 1960s. Click here for part three which wraps up the rest of the boxed set.

That said, the Dolby Atmos remix is a whole different thing and was very much the icing on the cake for this 50th Anniversary reissue series as far as pure Beatle joy and wonderment goes. And, as of now, this theatrical presentation was the only way thus far for the public to hear this particular new mix.

Now, I realize that some of you will be wondering : what exactly is Dolby Atmos?  In short, this new multi-speaker sound presentation system is a next generation immersive listening experience technology, delivering sound not only in front of you and from the sides and behind your, but also from above. Since this was possibly my first conscious experience hearing an Atmos system, I'll rely on information from the Dolby website to help describe it further. The official press release issued in conjunction with this Sgt. Pepper event reports:  "Dolby Atmos delivers moving audio -- sound that can be precisely placed and moved anywhere in three-dimensional space, including overhead. It brings entertainment alive all around the audience in a powerfully immersive and emotive experience."  The Dolby Atmos Wiki page offers more in depth information. Consider, for example, that the first generation "Dolby Atmos Cinema Processor" supports "up to 128 discrete audio tracks and up to 64 unique speaker feeds."

That's a whole lot of potential audio information coming at us, folks!!

Now, I will admit I wasn't planning on formally reviewing this event. And, frankly, I'd be hard pressed to call this article a formal review for numerous reasons. Its more of a fairly objective, simplistic listening report on what went on and what we -- I went with some friends -- seemed to hear.... 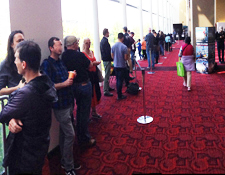 Notably, its important to mention that we weren't in any sort of "sweet spot" ideal seating situation. Arriving a bit over an hour early to wait in line, we were far from front of the queue. So by the time we got in, the best seats we could find were more or less in the center but up closer to the screen in the 2nd or 3rd row -- people must have been waiting for hours there to get in! Thus, our perspective of the surround material would on one hand be somewhat skewed -- very front-channels heavy. On the other hand, those seats were perhaps the ideal test of the Dolby Atmos system since -- in theory -- with a system like that, shouldn't every seat in the house be perfect?  I'm not criticizing here, mind you. I'm "just sayin'" (as the kids say these days...).

Anyhow, hearing Sergeant Pepper's Lonely Hearts Club Band pumping through a big state-of-the-art theater sound system couldn't really be a bad thing even if you were a door mouse listening while hunkered down in a corner underneath one of the seats in the back of the theater.

It was an impressive presentation, no doubt.

After spending the first half of the show (aka most of Side One) allowing myself to relax and float downstream, I perked up around the time of "Being for the Benefit of Mr. Kite" to take some notes about what was I hearing, things that were a little different or perhaps similar to the 5.1 mix.

And as far as I can tell, this was a whole new mix done for Dolby Atmos, not just a repurposing of the 5.1 mix that you can hear if you buy the boxed set.  For some more insights into the Dolby Atmos mix you can watch the video presentation they showed us before the listening session by clicking here (which will take you to Dolby's website)