Lost In The Shuffle: A Cornucopia of Collections

Compilation albums get little respect in the universe of record collectors and audiophiles.  Why? I'm not sure. I like them as they frequently offer rare tracks by favorite artists which only exist there. Sure, you might wait for an artist to get big enough to have their own boxed set collecting these sorts of rarities. But, then you're missing out an a whole bunch of fun and joy while waiting.  Since there are so many collections coming out seemingly all the time, it is easy for some of the good ones to slip between the cracks.  So, here is a quick look at some I've encountered in the past year which I think you, Dear Readers, might want to know about (and if you are interested, click on the titles below which will take you to Amazon where you can find the recordings): 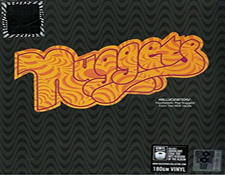 Nuggets Hallucinations: Psychedelic Pop Nuggets from the WEA Vaults -- This two LP set came out on Record Store Day last Spring with barely a fanfare made in its honor. That is a shame as its a nice collection of tracks from the trippier half of the 1960s by groups you probably haven't heard of before.  That it includes arguably the best recording by The Monkees -- "Porpoise Song," written by Carole King and Gerry Goffin -- says something as to the integrity of the album. That you also get tracks by an obscurity called The Holy Mackerel is a bonus joy -- I myself only discovered them in the last two years when I found their lone album from 1968 at a garage sale and was surprised to learn that it featured a pre-fame Paul Williams (who went on to pen hits like "Rainy Days & Mondays" for The Carpenters and many others).  These are the kinds of connections you can make when listening to an album like this. Check around as the price on this set seems to have come down quite a bit from the $30 I paid for it -- there are copies selling for well under $20 on Amazon! 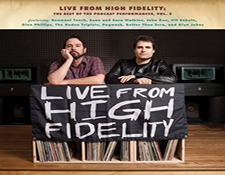 Live From High Fidelity Vols. 1  & 2  -- The idea behind these albums was noble: create a sampler highlighting gems from online podcast performances by artists visiting High Fidelity Records (a store) in Los Angeles. No brainer, right?  Tracks by John Doe, Sam Philips, Jon Auer, Matt Nathanson and others are indie rock heaven, a sure fire seller. Well, maybe. Actually, I didn't know anyone who bought either volume.  Perhaps it was priced too high. I know I jumped at the chance to buy it when I found it at a store blowing out Record Store Day overstocks at 50 percent off.  This album should never have been priced at $18.99.  But for $10 or 12  I bet it would be have been a no brainer for everyone else.  Curiously, I found a copy of the album in Amoeba Records' bargain bin in mint condition with the download code still in tact -- did ANYONE even bother to play this?  Jon Auer of The Posies' doing Big Star's "Thirteen" and Matt Nathanson doing his catchy indie hit "Kinks Shirt" are fine and wonderful. And its on perfectly centered quiet clear vinyl.  Volume Two is on black vinyl and it has a great unplugged version of X's 'See How We Are" done by John Doe,  and perhaps most important for a power pop fan like me, a live performance by Ireland's Pugwash doing their great shoulda-been-a-huge-hit "Here" (the original of which is available in the US on their compilation called A Rose In A Garden Of Weeds, also on Omnivore Records) Check the links above as you can find these albums on Amazon for around $10 each now. A steal. 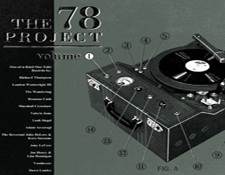 The 78 Project Vols. 1 & 2  This is a curious pair of albums which I completely missed back in 2013 when it was released.  But, thanks to the Amoeba Records bargain bin, I was able to discover these genuinely fascinating and fun collections on vinyl which were pressed at RTI in the Los Angeles area -- yes, take note that these are recordings by current artists made on technology from the 1930s, recorded direct to disc at 78 RPM on portable Presto recording machines (thus the cover art) put onto state-of-the-art vinyl at a highly respected pressing facility.  That said, there are inherent anomalies in the recordings but you get unique "field" performances by the likes of Richard Thompson, Loudon Wainright III, Rosanne Cash, Marshall Crenshaw, Victoria Williams, Ben Vaughan and (the aforementioned) John Doe among many others. Since the fidelity on these albums is not exactly the stuff that audiophiles use for demos, perhaps you might want to just spring for the MP3 versions available for download. The music is no less fascinating and fun.  And keep an eye on the bargain bins -- who knows, maybe you'll find a pristine pair of albums there like I did for  $1 each! These are part of a soundtrack to a film of the same name so I need to pick that up one of these days (its out on DVD).

Twistable Turntable Man - This is another album I never ever heard about from anyone. And it too came out in 2013 but this one I found at a thrift shop in perfect shape, a two LP set pressed on white vinyl including a working download card!  (Woo hoo -- Score!)  Its a fine tribute to the late great composer Shel Silverstein performed by some of today's finest  singer songwriters.  So you get My Morning Jacket doing "Lullabyes, Legends and Lies," John Prine doing "This Guitar is For Sale," Kris Kristofferson doing "The Winner" Black Francis and Joey Santiago (that is half of The Pixies, for those of you who are paying attention) doing perhaps Shel's most legendary song "The Cover Of The Rolling Stone."  There are tracks by Nanci Griffith and Lucinda Williams and Bobby Bare Jr. (yes, the guitarist who is in the current touring incarnation of Guided By Voices!).  Perhaps coolest is a version of "The Unicorn" -- which was a huge hit by The Irish Rovers in the mid 1960s -- done by Dr. Dog. It is a great version, a total reinvention and yet another testament to the quality of Mr. Silverstein's writing, that it can withstand many different interpretations and still remain true to the essence of the song.  I haven't seen this album on vinyl anywhere else but it is on CD or MP3 download via Amazon.com so check it out if you are so inclined.