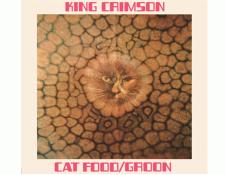 Progressive rock pioneers King Crimson are not especially well known for having hit singles. They were arguably one of the original album-oriented artists from the era, especially as FM radio caught on in the late 1960s and early 1970s.

Yeah kidz, there was a time when people listened to whole albums, start to finish. Imagine that!

But King Crimson did try and on Cat Food, their second single, they showed some of their underlying madcap sense of humor. The song originally appeared on the band's second album, In Wake of Poseidon in a considerably longer, more expansive mix. The single is now a rare collectible as it was never released in the US and contains a non-LP B-side. More on that in a moment. 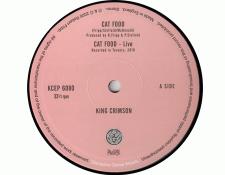 One of the really interesting things about listening to the recently released 50th Anniversary Cat Food extended play (EP) version of the single revolves around the way the single mix ends. It shuts down so abruptly and the next track starts quickly thereafter, if you aren't paying close attention it isn't immediately apparent that you are suddenly listening to an entirely different version of the song recorded some 50 years after the fact (and live at that!).

And that is part of what makes this fine Cat Food anniversary release such a fun listen: here you get the original 1970 single, a 2019 live take from Toronto and an alternate mix which is a bit longer. At first when you listen to it they sound almost identical but after a few listens you can tell which version is which. They are all good and it is a testament to the power of the current incarnation of the band, and particularly singer Jakko Jakszyk for creating such an uncanny tribute to original singer, the late great Greg Lake (RIP). 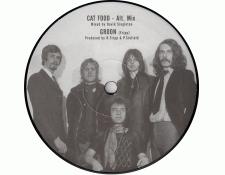 The song itself is a fun, near-funky, quirky novelty-prog pop romp featuring a wacky jazz piano solo that pre-echoes the dissonant wonder of then future Mingus alumni, Don Pullen.

The Cat Food EP is rounded out by the utterly amazing instrumental non-LP track called "Groon" which is essentially a full-on out-jazz improvisational excursion. It is terrific. And perhaps it is the ideal B-side because even in 1970, no pop radio station would likely play that track.

"Groon" remains a fascinating musical moment underscoring what a high level these then still very young musicians were playing at -- this track feels kind of like what might happen if Larry Coryell had playing with Captain Beefheart & His Magic Band around the time of Trout Mask Replica. Its no wonder King Crimson got their breakthrough opening for The Rolling Stones for their first ever concert!  I bought the 10-inch vinyl EP and CD of Cat Food in a bundle from the band via their website (click here) but you can find it on Amazon and on Burning Shed (click the underlined names here to get there) 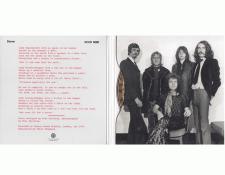 My current preference for Cat Food is the 10-inch vinyl version as it sounds quite nice, round and full. Plus the large scale packaging is fun.  You get nifty picture labels on the B-side of the record and a new A-side label that pays homage to the original pink Island Records design -- nice attention to details that fans geek out on!

The CD version of Cat Food actually is my second choice because it too has fun packaging that is different from the vinyl: its a gatefold cover with the image of the original 1970 era band (same photo that is on the label of the vinyl!).

In the streaming world, the winner of the high fidelity Cat Food sweepstakes is Qobuz which offers the EP in Hi Res form in 24-bit, 48 kHz fidelity.  Click here to jump to that version. 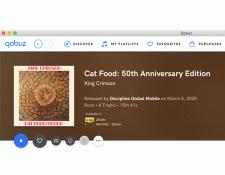 The Tidal stream sounds quite nice in CD quality, 16-bits, 44.1 kHz. You can click here to jump to it if you have access to that service.

The Spotify stream is ok at 160 Kpbs but it is not my choice for best sound. But since it is a popular platform, we thought some of you out there might find it convenient to know you can hear the songs there (click here).

So there you have it, Cat Food served five ways. Not bad for a tasty 50 year old 45 RPM single! The only thing missing is a video. Oh well, actually they did perform the song on Top of the Pops back then so click here to see the band lip syncing to the aspirant hit.