This story begins in 1980 with the release of the album called Drama, credited to progressive rock group Yes but in actuality featuring a then-new line-up of the band including key members of new wave band The Buggles (ie. "Video Killed The Radio Star"). Some Yes fans love that album and others still have mixed feelings about it; I for one have come to appreciate Drama as a solid, genuine record of Yes music. That Drama-era band only made that one album even though there was more material in the hopper. 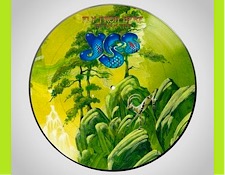 Admirably, in 2011 Yes issued much of that lost music. Called Fly From Here, the recording featured interim singer Benoit David and was produced by Drama singer / producer Trevor Horn.  Fly From Here was quite good, excellent even depending on your perspective as it captured the feel of (relatively) vintage Yes. It was issued on CD and on a very difficult to obtain vinyl LP. Fast forward to 2018 and now we have a newly revised version of the Fly From Here album called Fly From Here - Return Trip.  Recently the idea arose to have Horn re-record the vocals himself for an updated version of this fine sequel for the Drama-era of Yes. It's release offers us the opportunity to reconsider this music which never quite fully got its moment in the spotlight. The results are very interesting.

Fly From Here - Return Trip sounds really good and for the most part I do like Horn's new vocal and mixing approach. Seeing as he was one of the co-architects of the music, it might even be argued that this version is definitive. That said, Benoit David actually did a very nice job on Fly From Here and there are some fans I've spoken with who prefer his interpretation of the music; this could be perhaps because it was the first version that they heard. Alternately, I read a curious comment from a fan on the Amazon page for Fly From Here, pointing out that David's presentation captured some of the vibe of the youthful early Yes. Indeed, Trevor Horn's new vocals for this "return trip" sound more mature, considered and a bit richer than Benoit David's. He has after all had nearly forty years to internalize the ideas! The new vocals are mixed a bit more up front but also sound very natural performance wise. 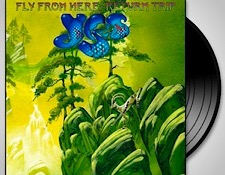 The songs are strong. Beyond the epic, near side-long title suite, I really like "Hour of Need" which could have been a single hit had it been released in the 80s. Chris Squire's "The Man You Always Wanted Me To Be" is beautiful and touching. If I have any nits about the new version of album it has to do with the inclusion of an additional Steve Howe track.  "Don't Take No For An Answer" is a perfectly fine song but -- with no offense to Mr. Howe --  I think it would have been better served if the vocals were performed by Trevor Horn or Chris Squire.

The new vinyl pressing is of high-quality, playing quietly and is well centered.  The feel of the the recording, the mix and the mastering is quite dynamic yet warm and inviting even when you pump up the volume on your stereo system.

There is also a live version of an early version of the song "We Can Fly From Here" culled from the 1980 Drama tour on Tidal (click here to jump to it). It is a little rough recording- and performance-wise, but the band was still working it out at the time so I give them kudos for even breaking it out as a work-in-progress. 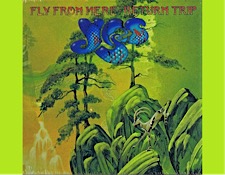 If you are interested in learning more about the Drama album itself, you can read my review of the fine audiophile grade reissue if you click here.

Ultimately, both versions of this new / vintage Yes music are valid. With similar-but-different cover art -- and, perhaps this is the point -- they are two of a perfect pair (if you'll pardon the King Crimson pun). And at the end of the day, its the music that matters and Fly From Here - Return Trip is definitely worthy of your attention if you like the music of Yes.