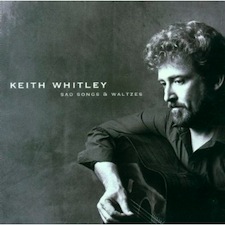 The late Keith Whitley, who died at age 33 of acute alcohol poisoning, was an example of why it isn't always a good idea to try to live your lyrics if you're country music singer. He started as a child, singing on the radio by age 9. At 15 Keith was touring with Ralph Stanley's Clinch Mountain Boys. Keith met Ricky Skaggs while he was with Stanley and went on to cut a bluegrass duo album with him. Next Keith joined J.D. Crowe's New South as their lead singer. Their album "Somewhere Between" features his spine tingling, bent-note lead singing. His solo career began with the trajectory of a rocket. He had three number one singles in one year and a promising future was virtually assured. Then came tragic death and the possibility of obscurity.

"Sad Songs and Waltzes" is a breathtakingly beautiful CD with a pervasive air of tragedy that settles like a mist over your listening room when you put it on your stereo. From the first Lefty Frizzell cut, "I Never Go Around Mirrors," to the final chords of Dycus' and Barnes' "Family Tree" this album oozes the essence of traditional country music like the smell of spilled whisky wafting up from an ancient bare wood floor. For anyone who is tired of the shallow gloss of hot country, these songs delivered with heartfelt purity, are as welcome as rain after a mid-summer drought. Even if you play it regularly over many years, as I have, this disc never gets old; there's just too much great music.

If you are already a Keith Whitley fan, unfortunately you won't find any new material here. The songs were culled from two sessions; a spring 1983 solo venture, and songs done for "Somewhere Between" by J.D. Crowe and the New South.  Top-flight musicians including the late Randy Howard on fiddle, Weldon Myrick on pedal steel, Ricky Rector and Jeff White on acoustic guitars, Kenny Malone on drums, Pete Wade on electric guitar, and J.D. Crowe on banjo. Wes Hightower, Alison Krauss, Dale Ann Bradley, and the Jordanaires all contribute backing vocals throughout the album.

Most of the material here was originally recorded in 1982 and 1983. Mastering Engineer Denny Purcell at Georgetown Masters did a superlative job freshening up this older material. My original copy has HDCD encoding. It's hard to tell without buying another disc whether the current production discs still have HDCD encoding, but I suspect that they do.

If you like traditional country music and you don't have all of Keith Whitley's recordings, you need this album. It's as perfect as country, or any other kind of music gets.