Is Downloading Worse For the Environment Than CDs? 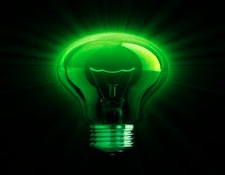 A recent study by MusicTank, UK, concluded that streaming could hurt the environment more than CD manufacturing. According to report author, Dagfinn Bach, "Streaming or downloading 12 tracks, without compression, just 27 times by one user would, in energy terms, equate to the production and shipping of one physical 12-track CD album." My response was a big, "Oh, Really?" While I don't dispute that downloading does consume energy, both on the server and the receiver side, the energy that downloading consumes is primarily in the form of electrical energy, which is cleaner to produce than what's required to make CDs.

CD manufacturing uses more than merely electricity. Oil, both in the CDs themselves, and in the processes of transporting the raw materials and finished products to warehouses and eventually the end-user, and other transportation byproducts are more damaging on the environment than mere electrical energy use. Also what about the other ancillary environmental impacts from CD manufacturing - for the paper in the inserts and the petroleum by-products used to make the jewel cases? And don't even start on the environmental costs of chemical-based "artistic" photography...

LPs, during their heyday, created their own environmental problems - think of all the pulp paper used in album covers (and photographic film and processing used for the graphics). Also the pressing process generated lots of vinyl waste, and the curing new vinyl outgassed lots of stuff into the atmosphere that you don't want to breathe.

Perhaps, in the long run, cloud-based music reproduction systems will consume more electricity than CD-based systems ever did, but the forms of energy used by a CD are more pernicious than merely electricity.