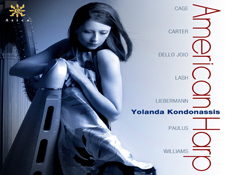 Ok, so maybe I'm overstating things in the headline, but these chiming instruments haven't quite been the center of most people's attention for... well... a while so I needed to grab your eyeballs (keep reading as this is pretty cool stuff!). In recent years, songwriter / harpist Joanna Newsom has brought some more mainstream focus to the instrument through her acclaimed album Ys. Prior to that, Swiss new age harpist Andreas Vollenweider was probably one of the biggest names pushing the instrument beyond its traditional boundaries.

So when I was asked to check out the music of Yolanda Kondonassis, I admit I was listening for some broader potential appeal within. An artist of her stature, highly regarded as virtuoso who as performed around the globe, is obviously going to play her instrument well. Of the two albums I listened to, I like the newer one, American Harp (2013, Azica Records), best as it tackles music more modern in scope (from John Williams and John Cage to Elliot Carter). It is a bit edgier in that sense and thus is a somewhat more engaging experience.

For the untrained ear listening to solo harp music -- and I admittedly count myself among that group -- after a while the tinkle-plink-pluck flavor of the instrument begins to hypnotize your mind a bit, taking you off into some blissful, almost meditative spaces. That is a good thing sometimes. However, the works on American Harp are more challenging compositionally and thus keep you a bit more engaged. This was notable on tracks such as Lowell Liebermann's Music For Harp, Op. 116, a work written in 2011.

That said, when I listened to the very same artist on her lovely album The Romantic Harp (Telarc, 2002) I inevitably found myself drifting off to sleep. This isn't a bad thing, mind you. It is after all a selection of pieces by lush, romantic composers like Puccini, Faure, Debussy and Saint-Saens, so it is supposed to be "pretty," emotionally relaxing and full of melodies that can lullaby you toward Morpheus. In some ways, this album is more of the cliche music one would expect to hear from a solo Harp recording. Again, that is not a bad thing...

The actual sound on the SACD is very nice and round, although the surround sound mix left me a little flat -- its ok, but it is basically a front and center recording with some room ambiance in the surrounds. Nothing dramatic happening here. But, it is nice sounding and that, perhaps, is the point; drink a nice glass of Prosecco listening to this at sunset after a long hard week and you'll soon chill out. 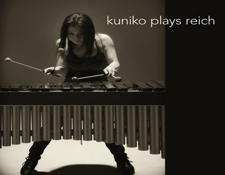 Kuniko Kato goes a step further working her Marimba magic on a series of recordings of works by none other than minimalist composer Steve Reich (Linn Records, 2011). That the composer himself has endorsed the album says a lot: "Kuniko Kato is a first rate percussionist who has put a lot of careful thought and hours of rehearsal into making this excellent CD. She has created new and very beautiful arrangements."

Like Philip Glass' music, repetition and subtle variation are hallmarks of much of the music of Steve Reich. Kuniko has accordingly layered up herself on this album using pre-recorded elements to create a compelling pulse. For example, the first track "Electric Counterpoint Version for Percussions" has been arranged for steel pans, vibraphone, marimba and pre-recorded tape. So here she gets to solo with her self over these varied textures, creating a haunting and overall beautiful sound. Likewise, "Six Marimbas Counterpoint" is a hypnotizing affair, creating swells of sound that wash over you like waves, recorded in a lovely manner that lets your feel the wood of the Marimba as the mallets layer on new melodies. The surround mix on this disc is also really quite immersive, with discrete activity in the surrounds enveloping you in a melodic world of bell-like tones that combine into something larger.

If I had a recording like this while in college I would have probably driven my roommates crazy using it for study music to block out the noise of the dormitory (as I often did playing Robert Fripp's Frippertronics and early ambient works by Brian Eno).

This is cool stuff. If you want some music that will let you focus on the tonality of a single instrument, these releases may be just the thing for you.