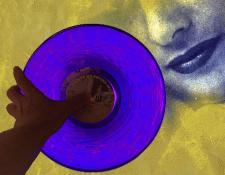 Even if you have been asleep the past 20 years you probably have heard a little bit about Dayton Ohio's hometown heroes, Guided By Voices (GBV) and their intrepid leader Robert Pollard. This is a group that against all odds has crawled out of the basement to become an internationally beloved voice of so called "indie rock" and pioneers of the "lo fi" made-at-home music scene. Collectively over the years, GBV has crafted a well oiled cottage industry that has issued more than 100 albums, countless singles, books, posters, T-shirts, artwork and more.

And here is the rub:  a whole lot of this stuff is at minimum great, much of it fantastic.

In the past 5 years or so there has been a fine new incarnation of GBV making the rounds of clubs around the world featuring members from an earlier incarnation of the group (genius guitarist / composer Doug Gillard and monster drummer Kevin March) as well as new bassist Mark Shue and second guitarist, the great Bobby Bare Jr. (yes, son of country music legend Bobby Bare!). I've seen this version of the band a couple times now and they rock madly.

Happily, so do their recordings... and there have been (again, not surprisingly) a lot of them, some of which I've reviewed here on Audiophile Review. Included are two two-LP sets (Zeppelin Over China, August By Cake), several single LPs (Warp & Woof, Space Gun, How Do You Spell Heaven) and a live album (Ogre's Trumpet and the archival Live In Austin) and many many limited edition 45s with picture sleeves and non-LP bonus tracks.  Plenty to keep the GBV fan happy and broke! 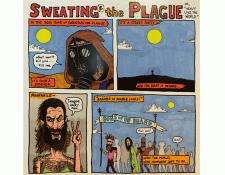 Some of the connecting glue on these new era GBV albums must be attributed to producer/engineer Travis Harrison who is finding a way to create good sounding modern GBV records that aren't overproduced yet decidedly not Lo Fi (although there are moments of LoFi joys, for sure!).  But in general expect to hear big crunchy electric Les Paul guitars, pounding rock drums, thumping Fender bass and Robert Pollard's still wonderful American-Englishman-from-Dayton-on-Thames vocal stylings front and center.  Ultimately its about the songs and like most GBV albums there are ones that get under your skin to become faves. The interesting thing is that the lines between the new GBV and Robert Pollard's solo release have blurred a bit so they aren't afraid to put on longer, more explorative prog-leaning pieces and even some quirky weird sweet slower acoustic moments.

Anyhow, last year there was a new album which I just picked up recently just as a NEW new album broke, so I decided to review them both for you, Dear Readers!  I'll start with the one that came out late last year first... 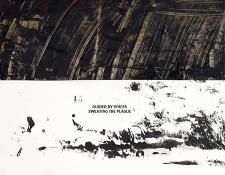 Among the tunes jumping out at me on this fine single LP are strummy "Street Party" and the 6/8 time "Your Cricket (Is Rather Unique)" both of which feel like some lost Who tracks from 1967/68 (and I realize I have said this before about GBV tunes, not a bad thing). Interestingly, the latter is sung by drummer Kevin March (good job!). "Ego Central High" is a crunchy sludge rocker which is followed by the beautiful sweet acoustic guitar introspection intro to "The Very Second." "Sons Of The Beard" is one of those dramatic multi part pieces found on Robert Pollard's solo albums, this one with super groovy old school (probably Arp or Moog styled) synthesizer parts and quiet acoustic bits which give way to epic near prog metal moodiness, feeling at times like a lost outtake from Quadrophenia (and that is a big complement).

The packaging on Sweating The Plague is deceptively simple, with lovely artful imagery on the cover and a unusual gatefold for the times in which you pull out the record from the inside spine (like the old "Unipak" style sleeves of the late 1960s and early 1970s). Its pretty cool and it comes with a groovy comic strip insert card explaining (I assume) an underlying theme of the album.  The album comes with a download in WAV and MP3 options, the former of which sounds fine for playing in the car or on your computer. Alternately, you can find Sweating The Plague streaming up on Tidal and Qobuz (click each service name to jump to those versions) which sound fine in CD quality. 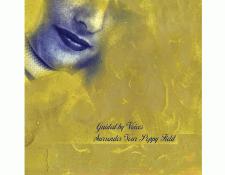 This album is perhaps a little more GBV-balanced in its mix of home made music and big studio grandeur. Travis Harrison has found a nice way to blend them all together in a unified whole.  Opening track "Year Of The Hard Hitter" is a blissful dirge with a guitar solo that echos the Piltdown Man "caveman" section of no less than Mike Oldfield's Tubular Bells.

"Queen Parking Lot" is one of those driving moments which gives way to the charming circus-organ churn of "Arthur Has Business Elsewhere."  I love the feedback intro to the Butthole Surfers-meet-Black-Sabbath dirge of "Stone Cold Moron." And then you get the lovely little one minute pump organ piece "Woah Nelly" which sounds like an old 78 RPM recording made with a sad church organ with congregation singing in response to Pollard's melancholy choruses. "Next Sea Level" closes the show with rich string sounds and haunting Fripp-like e-Bow'd solo lead guitars. Yah, GBV is letting its prog side come out to play!

And so it goes on Surrender Your Poppy Field which comes pressed on nifty (I'm assuming) Quiex styled vinyl (it looks translucent purple under the light) and a nice audiophile grade plastic lined inner sleeve. Someone is paying attention to the little details that matter.

As with the other GBV recordings, you can find Surrender Your Poppy Field streaming up on Tidal and Qobuz (click each service name to jump to those versions) which sound fine in CD quality. As I've found, I tend to prefer the sound of Tidal on these, but your experience may vary.

At the end of the day with GBV records I always wonder (a) why these guys aren't bigger playing big stadiums (yet, in a way I'm glad they aren't!!) and (b) why they aren't opening for The Who on their current tour. That would be such a killer double bill.  Maybe Eddie Vedder (a big GBV fan) can talk to his buddy Pete about getting GBV on the bill... can you imagine? I can!