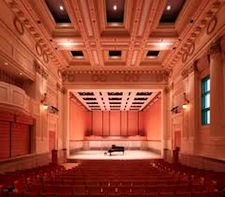 Gordon Holt once told me, "Depth is always the first thing that goes." By this he meant that when you change something in the signal chain that has less fidelity than the component it replaced, the first indication of this is the loss of depth cues. Holy collapsing soundstage Batman!

Of course, you need a recording that has natural depth to be able to detect subtle changes in depth reproduction. That leaves out 99% of pop and rock albums. Sorry folks, but there's just ain't no Jimi Hendrix (or Bill Monroe) album on earth that will tell you anything meaningful about a system's depth reproduction. All the depth cues are artificial. And although some instruments seem to be farther behind others in the mix, that's merely different settings on the reverb.

To judge whether a system can accurately reproduce depth you need a recording that has coherent phase information. That eliminates most multi-miked recordings as well, regardless of genre.

Multiple monophonic mics pretty much guarantee conflicting phase and locational cues. Some audio enthusiasts go so far as to make their own phase-coherent two-microphone stereo recordings for reference. That's what I do.

But if making your own recordings isn't on the horizon, I recommend MA Recordings as a good source of recordings that accurately capture the entire sonic picture. Heavy Metal and Electronica fans, be forewarned - most of their catalog is acoustic music, be it jazz, classical or ethnic roots.

Funny, off the top of my head I can't think of many rock albums that I would use to evaluate depth. Dire Straights "Telegraph Road?" That's artificial depth, and no matter how artfully applied it's still not as useful as the real thing.

What do I listen for to "hear" depth? On my own recordings I listen for instruments, voices, and the wall and floor reflections to all be in the right places. I know where all the players were during the recording and I expect when I play back the recording they are in those same places. Has the playback chain foreshortened the recording space so the instruments all seem to be on top of each other, or homogenized into a single wall of sound? Does each instrument seem three dimensional or flat, like a paper cutout? Is the front of the stage width correct? Do I hear the wall, floor, and stage reflections coming from the right spots?

On commercial recordings I'm listening for the same sorts of things - do the instruments and vocalists have dimension and weight, or are they flat and without form? But since I wasn't at the original sessions I must extrapolate where I think the instruments should be based on the sound and whatever pictures of the session might be in the liner notes. Harder, but hey, that's how most critics do it. J. Gordon Holt had an advantage - he had a library of his own recordings for reference.

But the important thing is - listening for depth isn't that tough. It's a skill, and with practice most normal human beings can get very adept at it. Many audiophiles get to the point that with a single reference recording they can not only tweak a system, but also tell you what's wrong with any system they play their recording on. At least that's what they tell me. And since I have some of my own live recordings that tell me 99% of what I need to know about a system after a couple of listens, I understand where they are coming from.

To tidy things up - If you want to get down into the minutia of subjective audio you've got to consider depth as one of the most telling sonic parameters.