I try to take a glass half full view to most things in life. And with the passing of many pop music heroes in recent years, it would be easy to take on a darkened perspective every time we say goodbye -- often suddenly -- to beloved artists like Prince, Davis Bowie, Les Paul and so many others. Not only did we not get a chance to say farewell and show our appreciation one last time, many times we simply do not really have a chance to prepare ourselves for their departure.  Johnny Cash was perhaps the first artist to fully embrace his mortality with a fine series of American  releases produced by Rick Rubin at the end of his life in the mid 1990s. 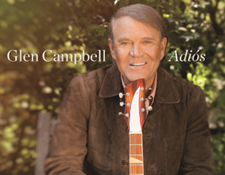 To that, as sad as many of us are about Glen Campbell's Alzheimer's diagnosis and recent passing, the upside is that he has been incredibly prolific in these last bunch of years, putting out, arguably, some of the finest music of his career and even touring proudly almost right to the end.  His latest album, released shortly before his death, and called Adios, may be his most poignant.

Based on tracks recorded in the studio before he descended fully into dementia, the album is very much a bucket list effort for Mr. Campbell -- who apparently was thrilled to be recording despite his difficulties at the time -- and a healing work of closure completed by his family and producer Carl Jackson.

Adios opens with a fine version of Fred Neil's "Everybody's Talkin'" -- a song of retreat in life -- and it is very much an homage to Harry Nilsson's smash breakthrough hit version as heard on the Midnight Cowboy film soundtrack.  Other choice au revoir faire include a quite perfect country-fried version of Bob Dylan's "Don't Think Twice (Its All Right)," where lines like "Adios is just too good a word babe, so l'll just say fare thee well" take on fiery new meaning.  His fine version of Dicky Lee's classic "She Still Thinks I Care" bids adieu to a former love. The duet with Willie Nelson on his "Funny How Time Slips Away" is just so, so touching. 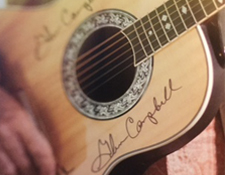 And thus goes the album right through to the Jimmy Webb-penned title track closer.  It is important to note that there are three other Jimmy Webb songs on this album, "It Won't Bring Her Back," "Postcard From Paris" and "Just Like Always."  For those of you new to Glen's music, Jimmy Webb was the writer of Glen's groundbreaking run of late 1960s mega-hit instant classics "By The Time I Get To Phoenix," "Wichita Lineman" and "Galveston."  In the words of producer Carl Jackson "I'm not sure a Glen Campbell record could truly be complete without a few Jimmy Webb songs," and these new songs are fine additions to Glen's catalog of Webb interpretations. Actually, it would be really nice if there was a collection of all the Webb songs Glen has recorded over the years... I might have to start building a playlist until that time... 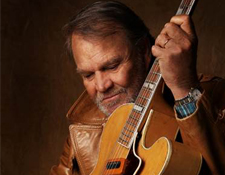 I had a pre-release download of Adios for a while and was just digging into really listening to the album when I heard the news that Mr. Campbell had passed. I would have liked him to know that I think his final statement sounds wonderful and is an uplifting, inspiring listen.  His voice sounds rich and determined. The song choices are sublime. The production is just right , showcasing Mr. Campbell's blend of pop and country aesthetics, long a hallmark of his recordings.

Adios is a fine conclusion to an amazing journey.  While it may be time for us to say "adios" to the physical person that was Glen Campbell, his spirit will no doubt live on through in his music.

I'll close here with a link to another Glen Campbell song of relatively recent vintage, his stunning 2011 cover of my favorite Guided By Voices song, "Hold On Hope" from the fine Ghost on the Canvas album.

"There hides the cowboy

Everybody's got a hold on hope

It's the last thing that's holding me"