There was a curious Flaming Lips release this past Record Store Day. Issued sort of on the heels of the band's quite wonderful new album Oczy Mlody (which I reviewed previously here on Audiophilereview), Onboard The International Space Station Concert For Peace is (per the hype sticker on the LP) "A fictional/fantastical live Flaming Lips performance on the International Space Station." 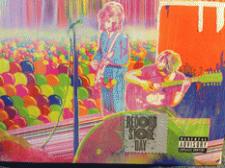 Indeed offered as a quasi-live album, this recording showcases more of the live presentation of the new music from Oczy Mlody -- (pronounced "ox-see mel-oh-dee", Polish for "eyes of the young") -- as opposed to the assembled-in-the-studio flavor of the original release. Its a nice distillation of the music benefiting -- perhaps, assuming this was recorded after the studio album's release while on tour -- from being road honed and fine tuned on stage.  I have no reason to think otherwise, but I'm just guessing here...

Its a really good record actually, especially after seeing the band play some of this material live recently at the Fox Theater in Oakland.

I appreciate the honesty of this album. It is presenting the essence of a current live lips show but not trying to deceive anyone that it is a pure live experience. I mean, this is called an "imagined" show aboard the space station, an event that has never really happened -- so far as I know only one person has actually performed in space and that was an actual astronaut. Plus, as some of you know, there is a long history of classic live albums that have been "sweetened" in the studio before release, either to correct microphone problems or simply to capture a better performance moment. Or simply to recreate the excitement of a live show with enhanced crowd noise and such. 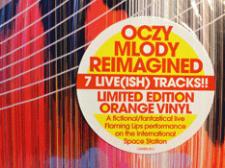 It's pretty cool that the Lips took some high quality recordings from the current tour and spiced them up a bit for a high fidelity album release with a twist. Its a good thing, not only for current fans but also for those older fans who have haven't been following The Flaming Lips' fairly wild and eclectic (and sometimes quite dark) explorations over the past five or so years. The material on Oczy Mlody is something of a return to form for those who came on board the Lips bandwagon around the time of Yoshimi Battles The Pink Robots.

If you aren't ready to buy the whole 12-song, two LP, 140-gram colored vinyl version or even the 11-song single disc vinyl - plus - download version or the CD, this new seven song live-ish version may be just the ticket for you.

And if you've run away from the Lips in recent years, perplexed by their bold experiments into uncharted territories, this new live album might be the "just right" re-entry point. I mean.... consider yourself sort of like Goldilocks on her encounter with The Three Bears.... You know... Where she is poking around their house and finds a bed that is just right, not to soft, not too hard... and porridge that is not to hot or not too cold and a chair that is not to hard or too soft. With that in mind, Onboard The International Space Station Concert For Peace may well become your 21st Century fairy tale live album of the year. 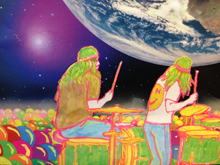 Oh, one last thought: while you're at it, be sure to look for the 45 RPM single release by The Flaming Lips of David Bowie's Space Oddity. Its a lovely tribute to our lost hero. They've been performing it live on concert and its a touching moment in the show. The studio version on the single is not a note-for-note recreation of Bowie's original -- not that one should ever expect that from The Flaming Lips -- yet it is made with honor and grace, very much connecting the dots between 1970 and 2017.