It's interesting taking a look back at old favorites, lost classics and occasional gems that slipped through the cracks of popular culture. 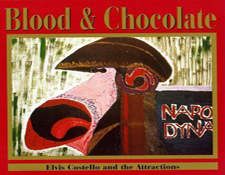 When Elvis Costello released Blood & Chocolate in 1986, his popularity was peaking as his status evolved into one of those artists whom you just knew was going to be around for a long time. He was less concerned about having monster hits and -- taking a tip from Tony Bennett -- focused on delivering consistently high quality albums, a legacy to leave behind for future generations. This was probably driven home by the debacle that became arguably his worst record, released two years before this, Goodbye Cruel World.

Blood & Chocolate was issued near simultaneously with King of America; this offered his old fans who still wanted to "rock out" a modern take on his New Wave / Punk classics like This Years Model while the other album pushed his art forward into the Americana, folk and otherwise roots oriented music that he would continue to explore for years to come (The Deliveryman, National Ransom, etc.). King of America is about dynamics and subtlety.

Blood & Chocolate hits you on the head with jack hammer precision, a record to be played loud, showcasing the glory of electric guitars and amplifier tones coupled with raw-nerve-ending vocals. Frankly, I wish it had one of those warnings on the label advising listeners to Play Loud.  Because it sounds its best played at maximum volume. That's not to say there isn't sublime music on it. Its just of a different sonority, edgier and more in your face than King of America. I mean, Elvis' penchant for delivering bile-infused lyrics doesn't get any harsher than on tunes like "Honey, Are You Straight Or Are You Blind?" or "I Hope You're Happy Now."

This new reissue of Blood & Chocolate issued via Universal Music sounds great played loud. I was assured by Universal's publicist that all the new Costello remasters were done off the master tapes at Capitol Records studios in Los Angeles and it sounds it.

Now this is going to sound a bit overkill and ridiculous -- because, lets face it, it is overkill and ridiculous! -- but, I compared this new pressing to four (count 'em, 4!) other versions of the album that I own:  an original US Columbia Records promotional copy, an original UK pressing on the Imp subsidiary of Demon Records, a German Line Records edition (on white vinyl) and Rhino's fine two-CD 2002 reissue.

Ya think I like this album a little bit? 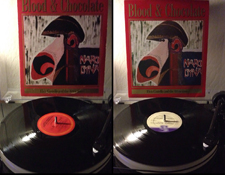 I must say, if you have any of these versions, you're going to have a pretty solid representation of the music within. The differences are subtle and so minute its almost not worth writing a review. But then, I thought, well, that is sort of the point of this process. So, thus I'm happy to say that the new remasters are a very fine recreation of the original album's intent.

In some ways, this new issue IS better than the original because it is on thick, dark 180-gram vinyl that is quiet and perfectly centered. Not that the originals were particularly noisy, but any reduction in the noise floor is helpful. You feel its impact in curious places like the break toward the end of "Home Is Anywhere You Hang Your Head."

Now, in general, if you are looking for a clean audiophile experience, you might want to wait for my review of Elvis' King of America reissue. Blood & Chocolate is an edge-of-the-seat type of album that, if I'm not mistaken, was recorded on 8-channel analog tape in a very quick and simple manner by the great Nick Lowe, producer of many of Elvis' seminal original records (including This Years Model).  According to the wiki: "Blood & Chocolate was recorded in a single large room at high volume, with the band listening to each other on monitor speakers and playing at stage volume, an unusual practice in the studio for its time."

The vocals here are surprisingly very up front and dry, without much reverb and or effect. On tracks like "I Want You" it really tests the ability of your turntable track the song because of the tighter grooves and Elvis' hushed vocals whispering loudly in your ears. You can almost feel the paranoid heat of his breath as he growls "Iiiii ... waannnnt .... youuuuu..." In fact, Elvis issued this song in semi-audiophile form back in the day on a 12-inch 45 RPM single. That said, this new edition LP compares favorably that 45, especially evident when comparing tracks like this. Elvis's electric guitar is in one channel sporting tons of amplifier tone. When his overdubbed acoustic guitar eventually comes in on other channel, the whole band locks in to that haunting, slow-rocking doomsday groove. Sibilance is inevitable on lines like "Its the way your shoulders shake and what they're shaking for...." This is where the 45 RPM version shines, I'm assuming because the wider grooves make tracking lines like that a little easier.  Although, even on the 12-inch there is some sibilance so -- heck --  perhaps my Goldring 2400 cartridge isn't robust enough to navigate those intense curves. Or perhaps this is just in the nature of Elvis' voice and an effect of his singing super close to the microphone in an extremely impassioned performance. 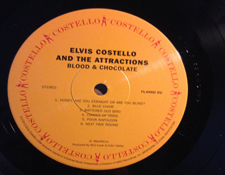 To that, a digital format like CD may be more desirable for some of you as there is seemingly less sibilance present (in general). However you have to deal with the artifact of digital compression that is the CD (44.1 kHz, 16-bit) -- so, when you turn the CD up loud it can sound a little harsh on the ears. Perhaps an HD download won't have this issue, but I do not have that version to compare.

Blood & Chocolate is a study in how fine tuned The Attractions had become as a band. Wait for the break on "Big Chair" where drummer Pete Thomas and bassist Bruce Thomas come back in a lock-step manner -- so tight it hurts! Mr. Thomas' drums sound great on this reissue, especially on tracks like "Battered Old Bird" where you can feel the walls of the studio drip nervous sweat as he clicks out Hitchock-flavored rim shots. Steve Naive's Lennon-esque piano chords resonate in the grandest of manners, another reason you really want to make sure your pressing is perfectly centered because otherwise those chords would be warbling back and forth. Fortunately, my copies are all just fine. 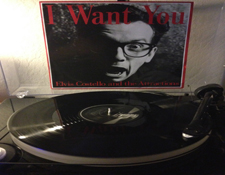 Bottom line, feel comfortable buying the new Universal reissue of Blood & Chocolate. If you can't find a clean used copy (UK or US versions sound more or less the same, with the UK being a hair brighter), this new reissue is a solid option. It comes in a faithful reproduction of the original cover on nice quality stock oaktag type cardboard, in fact, it reproduces the original inner sleeve (with lyrics) with a thicker stock paper than the original US editions.

They even reproduced the album side names accurately in Esperanto as "Flanko Unu" and "Flanko Du" in keeping with the instrumental credits on the inner sleeve.

Ok... its time to continue marching onward to meet the King of America...

(Stay tuned, kidz... we'll be back after station identification).