ELO's From Out Of Nowhere Features Great Songs That Deserve Better Sonic Treatment On Qobuz, Tidal and Spotify 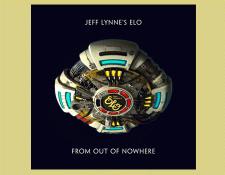 I'll begin this review from a glass half full perspective when listening to the musically fine new record by Jeff Lynne, founder of The Electric Light Orchestra and producer of everyone from Tom Petty to The Beatles. From Out Of Nowhere continues Jeff's process of self-crafting every instrument as on his last several recordings. Here in about 30 minutes you get ten tasty new ELO-flavored tunes which are catchy, hooky, heartfelt and driving as one might hope.

Like a 21st Century Les Paul-meets-Todd-Rundgren, Lynne's productions are mostly meticulous. They are also of a particular flavor, a production style that some of you might recognize on recordings he produced with The Traveling Wilburys, Tom Petty and even The Beatles. At its root this revolves around simple clutter-free rock drum patterns. 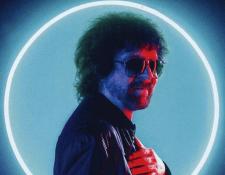 The particular sound flavor on From Out Of Nowhere is... well... a thing. And once you get used to that thing, it's OK and you just can focus on the songs. But since this is Audiophile Review, I feel its my (ahem) sonic duty to alert you to some possible issues you may experience if you buy this album.

First off, don't expect to hear much in the way of high end sparkle on this album. This is not the dynamic ELO sound you loved on Out of the Blue, New World Record and Eldorado. Heck, its not even as dynamic as the last album, Alone In The Universe.

My buddy Frank called me up the day he received his CD of From Out Of Nowhere in the mail and he was aghast. Frank is a club DJ and he has a pretty nice Stereo system but its not any sort of super high end set up of the sort many of you are listening on. So I was especially concerned when he was saying there was no high end (he won't even listen to it any more!). 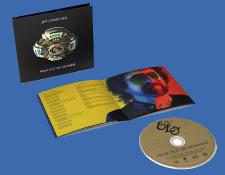 I thus held off on buying the vinyl or CD when it finally appeared in some Bay Area stores (a week after it dropped everywhere else, btw).

Instead, I waited to stream From Out Of Nowhere on Tidal and Qobuz. I was initially encouraged when I saw that Qobuz has the album streaming in 96 kHz, 24 bit fidelity. Tidal has it in 16-bit, 44.1 kHz (ie. CD quality).

Back to that half-glass-full vibe, I am happy to report that the whole of From Out Of Nowhere isn't entirely flat sounding. "Losing You" jumps out a bit more like the sound Jeff achieved on Alone In The Universe (which I reviewed, by the way, click here). It is a palpable difference. All of a sudden there is a somewhat shinier presence, Jeff's voice is more up front and the instruments are much clearer.  I can hear the tambourine percolating on "Down Came The Rain." 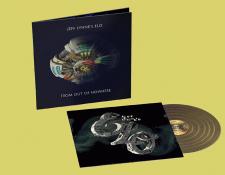 But overall From Out Of Nowhere sounds like there is a weird wooly blanket enveloping the recording, mushing down vocal and instrumental detail.  The drums on "One More Time" focus on a swishy high hat, a dull muted but natural sounding snare drum hit and occasional tom tom fills. Its ok. But it could have been so much more as its a great little rocker of a tune. "Sci-Fi Woman" at least has some acoustic guitar coming through the mix. "Time Of Our Life" sounds pretty good, with Jeff's signature electric and acoustic blend working well, the vocals more up front and overall a better sense of dynamics. The final track "Songbird" may be the best sounding track on the album, with a nice organ-piano-strings dynamic bolstered by relatively clean kick drum and cymbals. The harmonies sound wonderful there.

So the question remains as to why the rest of the album couldn't sound this good? 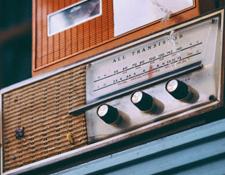 Well, I am completely guessing here so take this with a grain of salt for the speculation that it is.

It is possible Jeff recorded these tracks at different times in different digital audio work station type programs. Or perhaps he switched plug ins and other outboard effects along the way, which might result in sound variation from track to track.  Or perhaps the tracks were recorded on a lap top in different hotel rooms while on the road while on tour (some bands do that these days, folks).

Or it is entirely possible that he just didn't want much of a high end in some of these tracks so it would sound like more like it was being played on an old AM radio. Perhaps the album was mixed so that by the time it got chopped down to MP3 fidelity and streamed over Spotify and listened to with cheap ear buds that it might sound pretty good?  I mean, Phil Spector and Brian Wilson legendarily crafted their recordings to sound fantastic coming out of little monaural car and portable transistor radio speakers. 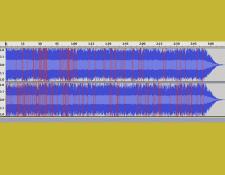 Out of curiosity I played the title track via my iPad's Spotify account, just listening through that tinny little speaker there... and you know what? It sounds pretty good there. There, I hear more a bit more of the cymbals and drum snap -- relatively -- than on the 96/24 version!

I wouldn't be surprised if the targeted "hit" tracks on the album might have been "brick walled" to optimize their chances for viral success on streaming services like Spotify. Curious still, I bought an MP3 download of the title track off of Amazon to check. While its not a flat brick, there is not a whole lot of dynamic showing here... at least on the MP3 I downloaded. Your experience may vary!

This is a shame. From Out Of Nowhere is already a hit in the UK so someone is liking this! And I do like the music, which is what makes this so frustrating. Signs of the times: perhaps it will sound best played through a single Bluetooth enabled speaker sitting on your kitchen counter.

Siri: Please play me a remixed version of ELO's From Out Of Nowhere!

If From Out Of Nowhere becomes a big enough global success maybe -- just maybe -- Jeff will offer up a special "audiophile" version with wider dynamic range and such. 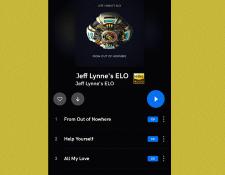 So, again don't get me wrong about this: I really do like From Out Of Nowhere, I just don't like how it sounds. I have been a fan of Jeff and ELO since I was in Junior High in the mid-70s so I will always be listening to what he puts out. And given his travel schedule with tours and such, its kind of amazing that there is even an album out at all this year.

I will no doubt spend more time with From Out Of Nowhere but, ultimately, I will be hoping for a better remix down the pike. Maybe Steven Wilson can save the day! Lets hope something positive happens to make these new ELO recordings sound as good as they deserve.