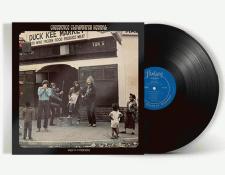 At risk of sounding like a broken record I have to reiterate that when a reissue is done well it can be a fairly definitive listening experience versus pursuing the obsessive collectors "holy grail" of an original vinyl pressing in perfect condition.

As I reported back in June, the new Half Speed Mastered Abbey Road Studios series of re-issues by influential California roots rock band Creedence Clearwater Revival (aka CCR, aka Creedence) have been pretty fantastic so far. I recently was sent another in the series, the group's legendary fourth album from 1969, Willie And The Poor Boys, and the results are wonderful and in keeping with the earlier editions.

But before I go into the sound, you may even be wondering why this album and band is considered "legendary" in music history terms.  By this time the band had already had several smash hit singles, platinum-selling albums and a reputation further enhanced by an appearance at Woodstock. 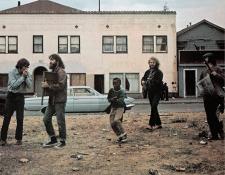 From the wiki we learn: "The year 1969 had been a remarkable chart year for the band: three Top Ten albums, four hit singles (charting at No. 2, No. 2, No. 2, and No. 3) with three additional charting B-sides. On November 16, 1969, they performed "Fortunate Son" and "Down on the Corner" on The Ed Sullivan Show." Creedence was on a serious roll folks, and Willie And The Poor Boys only helped to solidify their momentum.

Meanwhile, getting back to the sound and the significance of finally getting some high quality reissues of these classic rock albums, I will refer you back to my earlier CCR review which I encourage you to check out as it includes links to mastering engineer Miles Showell discussing the reissue series as well as other useful details (click here). For your convenience however, I have included an excerpt which summarizes important considerations relative to these reissues:

"...clean original (aka "OG") pressings of CCR albums are very difficult to find for numerous reasons. First and foremost, these records were played a lot as they were primo party records back in the Hippie-driven turn of the decade. So most used copies you find out there in the wilds of record collecting are pretty well worn. 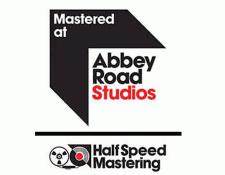 "Secondly, Fantasy Records had some issues with quality controls which were, well, out of their control. Like Motown Records, Fantasy -- from everything I've been told over the years from other collectors -- used RCA to press its albums in the late 60s. This was great when RCA was using thick quality vinyl but with the advent of its Dynaflex formulation in the early 1970s, most Fantasy albums from that period are pretty flimsy and often noisy.  Late 70s pressings weren't much better due to the oil crisis at the time. Bottom line: it could take you a long time to find that crisp minty "OG" pressing. I know this because to do so it has taken me decades and multiple upgrades over the years. It's just not that easy."

And I will update this notion with another detail I forgot to mention previously:  late 60s RCA pressed albums sometimes experience a weird aging phenomenon I've not quite figured out. This is something I have come across numerous times on records by Harry Nilsson, The Jefferson Airplane and the original cast recording of Hair (all on RCA) as well as CCR: the thicker records this period sometimes become cloudy looking and develop an odd background hiss that no amount of cleaning seems to remove. I used to think this was a result of playing on bad turntables but I have seen this on many different albums I've purchased over the years from a variety of sources so I am leaning towards the belief that there was some issue with their vinyl formulation at one point (it may have been an issue at one particular pressing plant). 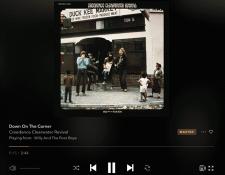 All that said, this new reissue sounds great and is in keeping with the other two prior albums I've reviewed. The sound is well balanced with clean highs, rich lows and a nice mid range.  Most importantly it sounds like Creedence Clearwater Revival's Willie And The Poor Boys should sound!. And it pretty much looks like the album should look with crisp original album graphics, period-accurate labels and high quality cardboard cover design.

On Tidal and Qobuz, you can hear Willie And The Poor Boys streaming in 96 kHz, 24 bit fidelity. A sampling of tracks leads me to think that results there are pretty good overall without any of the obvious high end digital harsh edges that tend to bother me and a relatively warm flavor to the overall sound. You can click here for the Tidal version. Click here for the Qobuz version. Between the two streams, this time I think I like the Qobuz version better for some reason, perhaps because it sounds a wee bit more like the vinyl; I realize that for some of you that detail might be enough to make you opt for the Tidal MQA version!  Just realize that your experience may vary, as they say.... 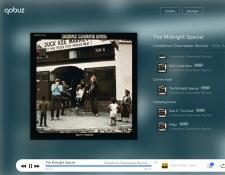 Which version do I like better? Putting aside my vinyl bias as much as possible, I  think the new vinyl (and original vinyl pressings for that matter) sound better than the streams for numerous reasons. For a couple of examples, the snare hit on "Fortunate Son" sounds more natural to my ear. And the chorus harmonies on "Down on the Corner" sound a bit curious on the streams, perhaps a bit more compressed, I'm guessing. Of course, at the end of the day this is all splitting hairs.  The streams may well sound perfectly good and acceptable to you. Anyway you listen, ultimately its about this music and Willie And The Poor Boys is an almost perfect rock 'n roll album end to end.

If you are still listening to an old 1969 LP pressing or a late 70s or 80s pressing (or CD for that matter) of Willie And The Poor Boys, you can probably do a lot better sonics wise. These new Abbey Road Half Speed Masters of Creedence Clearwater Revival's catalog seem to be a solid place to start.