The concept of the "Power Trio" was arguably invented with the legendary rock band Cream. Built around guitarist Eric Clapton, bassist Jack Bruce and drummer Ginger Baker, the group began as something of a supergroup and in just two years time built a reputation that has stood the test of time -- actually, its the stuff of legend.  And, in 1968 it was time for the band to call it quits for multiple reasons so they named their final album Goodbye and took the show on the road for one last good run. 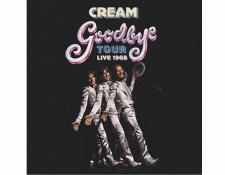 This tour is the focus of the wonderful new boxed set out this week from Universal Music and its Polydor Record label, called Cream Goodbye Tour - Live 1968.

Of the 36 tracks here, 29 have not been released on CD before (19 previously unreleased plus the Royal Albert Hall show which was only out on DVD) which underscores some of the appeal here. You see, not all that long after Cream's Goodbye album was released Eric Clapton and Ginger Baker reemerged with yet another supergroup assemblage and another legendary album, Blind Faith. Then Clapton split to form Derek & The Dominoes for the landmark album Layla. 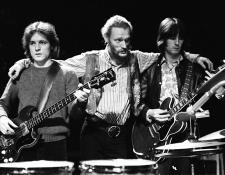 The bottom line is that most of us who grew up with Cream as this legendary legacy group that helped change the face of music in the mid-1960s (along with Hendrix, The Beatles and a few others) never got a good in depth look at what the band was about on stage.

The sound on the first three discs of Cream Goodbye Tour - Live 1968 is uniformly excellent given when they were recorded and such, taken off of mixed master soundboard recordings. The Royal Albert Hall concert on the fourth disc was mastered from the original 1968 "analog transfer reels" by Jason NeSmith at Chase Park Transduction, Athens, GA; given the noticeably lower fidelity nature of this particular recording, I assume that it was taken from a film source used to make the concert movie of the period. Still, once you get used to it, the performance that night is ultimately what one needs to focus on... but jumping from the first three to this, well it can sound a bit jarring. So... be aware of that going into this, my only little nit to note on this set.

A handful of these tracks peppered the rather lackluster single disc (but well played!) packages Live Cream and Live Cream Volume 2, albums which were released in the early 1970s. 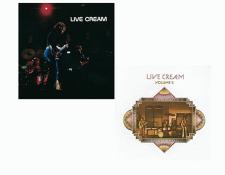 Don't get me wrong: the music was good but it wasn't the same sort of deep immersion in the band's music in a manner that, say, The Allman Brothers Live at Fillmore East or The Band's Rock Of Agesdid for those bands.  Unlike The Allman and Band albums, Cream's two live discs were ultimately kind of forgettable (at least for some of us they were; your experience may have been different but being a kid growing into adulthood in the early 70s I don't remember as anyone really raving about those records).

So here on Cream Goodbye Tour - Live 1968 we get full shows. Finally we can make that deep dive into the live-whipped Cream pie (and its very tasty, indeed)!  And its not just about Clapton's amazing Guitar pyrotechnics -- there is a reason graffiti began appearing around London before Cream existed proclaiming "Clapton is God." But the band's foundation of Ginger Baker's rock solid but free-jazz-loose drumming and Jack Bruce's spectacular lead-bass playing help to elevate these performances into that realm of musical magic. Bruce's voice is in top form.

These guys were a jam band before the concept really existed as shown on extended excursions such as the 16-minute long "Spoonful" from Oakland Coliseum and the 14-minute "Toad" from San Diego Sports Arena. As when  listening to Beatles recordings from early 1960s, it is quite amazing that these sound as good as they do given that monitors and advanced sound systems were barely in their infancy. You can hear periodic moments where Baker gets out of sync with the band but he's quite brilliant at finding his center so it feels more like an intentional thing than losing rhythmic footing. Heck, maybe it was intentional!  I don't know for sure... but you get the idea. 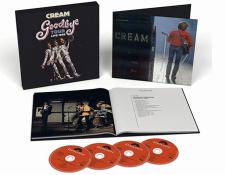 Now, there is a film of the Royal Albert Hall concert on YouTube (click here). It doesn't sound very good but you get a bit of an idea of what they were like on stage amidst the incessant zooms and closeups -- dated psychedelic production techniques which are a bit hard to watch these days.

I would rather use my mind's eye listening to these concerts and looking at the pictures of them on stage in the wonderful hard cover book included with the set to imagine what they were like. Cream Goodbye Tour - Live 1968 is essential if you are a fan of the band and its individual members. The packaging is exemplary, housed in a nice 10-inch LP-sized hard shell box and the book includes all manner of color and black and white photos -- you get a good sense of what the band was like on stage.

And what a great live band they clearly were. Powerful as many of us imagined they might be.

Cream Goodbye Tour - Live 1968 is an important release and even though it took 52 years for this material to be released, at least it is here today finally.