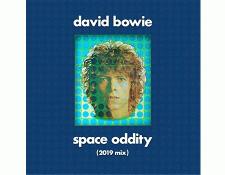 Remix albums can be a dubious thing if not handled with so called "kid gloves."  Amidst the grief after David Bowie's untimely death four years ago, there have been a flurry of releases from the archives. So much so, it became difficult for this reviewer to keep pace. Heck, I haven't even opened up some of the Record Store Day special editions I picked up. I haven't played Bowie's swan song, Black Star, since it came out and haven't even opened up the clear vinyl special edition I scrambled to get as if on autopilot back when it was released.

That said, I'm finally in a good place about Bowie and can begin to listen to him again more readily with open ears and mind without feeling as much of the pain. This week, I explore a couple of vintage Bowie remastered (and even remixed) reissues which you may have wondered about or perhaps overlooked. 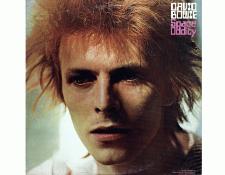 I almost didn't buy the Space Oddity 50th Anniversary Remix but I am so glad I did! Tony Visconti's reconsideration of Bowie's seminal, career-kickstarter "Space Oddity" is wonderful. I've compared it to my late 70s/early 80s promo copy of the album as well as the 1990s Rykodisc clear vinyl LP and the differences are significant and happily not off-putting.

No, in fact, it would take someone like Mr. Visconti to be able to craft an album like this which improves the sonics and opens up new vistas for the music without changing its intent. This new edition still sounds like Space Oddity. But there are levels of clarity here now that were not apparent on the earlier versions I've heard. 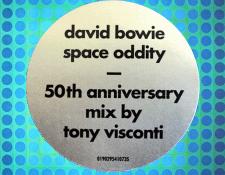 Now, the caveat to my review here is that I have never owned an original UK edition of this album.  I am not embarrassed about this considering that not many have, resulting in the album still being a hefty collector's item after all these years.

In the United States this music initially appeared on a rare edition titled Man Of Words, Man Of Music on Mercury Records with a different cover similar to this new reissue. It was ultimately retitled after the hit single happened and was reissued by RCA Records after Bowie's Ziggy Stardust album became such a smash success -- they even repackaged it in a Ziggy-styled cover design, which may be more familiar to many of you. 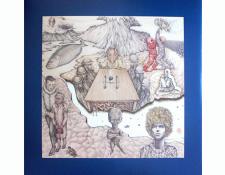 Most of the differences on the Space Oddity 50th Anniversary Remix are very tasteful, with subtle-yet-dramatic use of reverb and an occasional echo effect here and there. Most significantly, all of the instruments are now remarkably clear and distinct, with rich, round-sounding acoustic guitars and full-bodied basses (wait for that low bass break in the title track -- its a big kick!).

In comparison, my US pressing sounds pretty solid all things considered but those little details aren't as rich -- the acoustic guitars are boxier sounding and the mix overall feels a bit more primitive (which it probably was, relatively!).

This version also restores the song "Conversation Piece," originally intended for the album but released as a B-side. 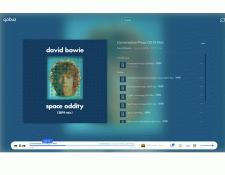 Sadly, the clear vinyl Rykodisc version I own really pales in comparison which is too bad as its a quite lovely package. I'll likely be getting rid of that from my collection once I make sure that I have the bonus tracks elsewhere (I think I still have the Ryko CD from that period with those tracks on it).

This new Tony Visconti remix will likely become my "go to" copy for listening to Space Oddity. It is that good. 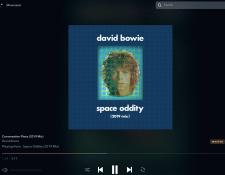 What are you waiting for?

Check ignition and may Bowie's love be with you...