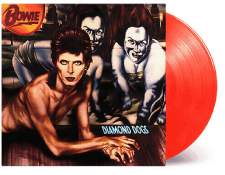 The question I ended up asking myself after the red vinyl Diamond Dogs 45th Anniversary pressing arrived in the mail was: did I really need this release?

I mean, I have a pretty good condition promo copy original pressing (orange label RCA) and a CD. But... I never had the mega-rare, censored first version of the album with the Bowie-dog creature's genitals (on the back cover) intact. Most copies of the album have them airbrushed out, but this newer edition features the original art.

Over my decades of record collecting and crate digging, I'd never seen an original copy anywhere so this reissue of it was tempting for that alone. Yet, I held off on buying it until this pandemic happened, oddly enough. When I was poking around 1-2-3-4 Go Records' web store on Discogs, I saw a spiffy red vinyl pressing -- a so called "brick and mortar" exclusive to independent record store dealers -- available for a very reasonable price. 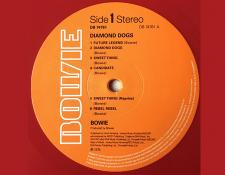 Click! It was added it to my shopping cart.

My copy of the red vinyl Diamond Dogs 45th Anniversary pressing arrived in fairly short order and in general I'm not disappointed. This is the same 2016 remaster that has been out for a while. Volume wise, the mastering is very similar to my US vinyl pressing, with some improved sense of musical detailing apparent. Apart from periodic moments where I detected a somewhat harsh crispness (if you will) -- leading me to think that this was mastered from a high res digital source -- in general the album sounds like Diamond Dogs should sound. That is a good thing.

As I never had a UK pressing before, I'm assuming that the increased clarity has something to do with that master being used vs. the US version which (again, I'm guessing here) might have been tweaked inward a bit for the US market back in the day. 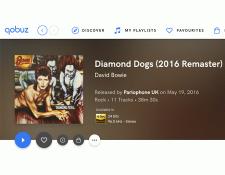 The likely 180-gram red vinyl is well centered and dead quiet. It sounds good. I should be happy. I guess I am. Yet, now that I have the Diamond Dogs 45th Anniversary reissue in hand, I still have to ask myself, did I really need it?

And now some perspective from the record collector side of me:  perhaps now that these reissues are available, we will start to see more original UK pressings popping up out in the wilds of used record stores and flea markets. If I could get my hands on a nice original UK edition -- with the original cover art intact -- I might well get rid of the red vinyl edition. 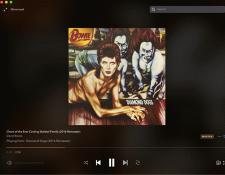 So, yes, the restored art is cool but at the end of the day it is a pretty silly thing that they even censored it back in the day. This original drawing of the imaginary Bowie-as-dog-creature can now be found all over the Internet.

This is the kind of ridiculous turmoil us record collectors go through, folks.

What's that, Dear Reader in the back row? You say you don't want to mess with any of this physical vinyl stuff anymore. Well, that is no huge problem these days. You can find Diamond Dogs streaming in 96 kHz, 24-bit fidelity on Tidal (click here) and on Qobuz (click here) sounding about the same, a bit brighter perhaps. If you just need the music, the Diamond Dogs 2016 remaster is up there for the streaming.

But if you ever wanted a "complete" version of this now-classic 1974 album by rock legend David Bowie, now is the time for you to pick one up simply because you finally can.