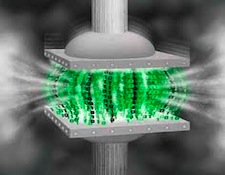 Practically all recorded music is compressed at some point in the recording or reproduction chain. Whether you find this "shocking" or merely "the facts." Depends on your level of familiarity with the recording process.

For those audiophiles who've never been around the business end of a microphone the plain fact is that compression - the act of reducing the dynamic range, can and often does take place at any (and sometimes every) stage in the recording process. Even LPs (one might even say especially LPs) have limiting built into the production process. All cutting lathes had limiters to restrict the loudest passages. And phono cartridges, due to their construction, limit the loudest passages of LPs.

Most engineers use limiters and compressors (and yes, I know Mapleshade Recordings is one of the few that doesn't). Either you control the dynamic levels by requiring that the musicians adjust their dynamic range (think chamber music ensembles), or you do it in the signal feed through limiting and compression. Personally I prefer to use limiters to compressors, since with many types of music, asking the performers to monitor their levels forces them to constrain their playing.

When I record I'm primarily concerned with preventing clipping, so on occasion I've used a limiter, such as the one built into the Apogee AD-1000, which J. Gordon Holt and I used as our principal A/D for quite a few years. But, with amplified instruments such as electric guitars, you often need to raise the volume of the quietest passages so they can be heard, which is done with a compressor, as well as limiting the peaks with a limiter. Vocalists, especially in dense mixes, often need both compression and limiting.

If you've been around the audio biz a while you've probably heard "The Sheffield Drum Record" or Marc Levinson's recording "In a Life" by Bill Elgart. Both feature a solo drum kit, recorded with no compression or limiting. In both cases the sound is impressive, dynamic, and if another instrument was introduced to the mix, impossible to record without dynamic compression. If a single instrument used the entire dynamic range of a recording process (as in these two drum recordings), adding another instrument will require adjusting the levels of the drums. Let's say, for argument's sake, the second instrument is an acoustic guitar or a human voice. There's no way that an acoustic guitar's output will be anywhere near that of a drum kit. So you have to turn up the guitar or turn down the drums. It may be impossible due to their different volume levels, to even record them in the same studio or at the same time. And if you must record them "live" at the same time and space, you're going to have to go to lengths to prevent the guitar's mic or mics from picking up the drum's output.

Frankly, there are very few musical ensembles that you can record all at once without using limiting and compression. Only those groups capable of "self-limiting" such as chamber ensembles, small jazz and or acoustic music bands, who can control their dynamics within the constraints of the music, are good subjects for completely purist/minimalist recording techniques.

Of course there are exceptions. I record entire symphony orchestras using two microphones and no compression. But to do this I must record at a much lower level than otherwise. Often my mid-level volume is 10 dB below what you'll find on a commercial recording. And sometimes an orchestra will surprise me and play a FFF with more force than during rehearsals, and I get a clip. Sometimes I can fix that later, other times, it's a permanent problem.

So, the next time someone starts the standard audiophile bitchfest about compression and limiting, you might mention that their favorite LP/CD most likely has some compression somewhere in the recording chain...