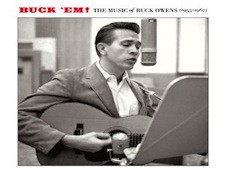 I just finished reading a wonderful autobiography called Buck 'Em The Autobiography of Buck Owens. Written by Randy Poe based on tape recordings made by Buck Owens during his last years, the book captures both the times and the life of Buck Owens with insight and clarity.

If you have an interest in roots country or even modern country, you'll find Owens' bio full of fascinating info bits. During his years with Capital Records he produced a staggering number of recordings, some good and some not so much. Also Owens readily admits that his stint as the host of He-Haw was a mixed blessing. He received super-big payouts, but it led to what Owens called "overexposure" that negatively affected his record sales.

My favorite story in the book is not about music, but cameras. When Buck Owens and his Buckaroos went on tour in Japan in 1967, "Well, as you can imagine, the first thing we had to do was get to the nearest electronics store and buy ourselves some Nikon F cameras...I bought one, all the Buckaroos bought one, Jack McFadden (his manager) bought one...he went through thirty-five rolls of film on that trip...but not a single one of his 1260 pictures came out because every time he'd loaded his camera he'd put it in backwards." 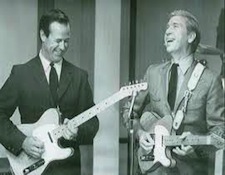 Buck Owens not only details his busy life as a musician and VERY successful businessman, but also his inner life. The sudden death of Don Rich, Owens' band leader, lead guitarist, and musical partner due to a motorcycle accident devastated Owens in ways that he never fully recovered from. Owens admits that he suffered from a chronic depression that lasted for the rest of his life that was initially brought on by Rich's death.

So, if you have more than a passing interest in American music and specifically American Country Music, get a copy of Buck 'Em, and then put on Buck Owens' live version of "Johnny B. Goode" from Live From London or Ray Charles version of Owens' song, "Crying Time" and settle back for a good read.