Blues For Allah: Rediscovering a Grateful Dead Classic in Hi-Res

This 1975 album by The Grateful Dead, Blues For Allah, has always held a curious spot in the hearts of many a Dead Head. Speaking of it in LP terms for a moment, "Side One" was just about as perfect a statement as the band ever made in the studio, with exemplary songs, performances and sound quality. "Side Two," starts out strong with "Crazy Fingers" and then moves into the gorgeous instrumental "Sage & Spirit." After that, the last 15 minutes of the album were often considered something of a let down as the band indulged in an extended mind trip song cycle kicking off with the dissonant-seeming title track. 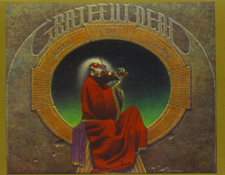 On the original LP, that song cycle wasn't an particularly good trip, with its quiet introspective periods that at times got lost in the noise floor of the average mid-70s turntable and hi fi set up. Also, those LP pressings, by United Artists, weren't the best and some were downright noisy.

A lot of mid-70s vinyl was pretty weak due to the oil crisis and cost cutting measures being taken by many a company -- one of the reasons I started collecting "original" pressings of older albums in the first place actually... but I digress...

Anyhow, the potential for appreciating this rather challenging piece of music that was decidedly not rock, jazz, blues, folk, country or whatever after all the prior groovy melodicism was difficult.

Most times people would take the album off once "Sage & Spirit" had played; some like me would exit right after "Crazy Fingers," frankly.

So I approached this review with a bit of trepidation.

Fortunately, this process has been a joy of rediscovery!

First off, after washing my original mid-70s pressing of Blues For Allah, and realizing that I was playing it for the first time on my now-not-quite-so-new turntable -- a Music Hall MMF 7.1 -- I immediately sensed that I was really very much hearing the album in a new way. The music was jumping out of my speakers and the noise floor -- while still palpable -- was disappearing. So the album sounded much less murky than I remembered and all that brilliant musicianship really shines gloriously. I can imagine that perhaps one of the super deluxe LP reissues might sound real nice.

Playing the 2004 CD reissue (from the Beyond Description boxed set), Blues For Allah sounds real solid as CDs go. But there is an undeniable brittleness in the high end that, frankly, tweaks my ears the wrong way. Digital edges are evident all around the lead vocals, cymbals and the sparkly guitars. It sounds fine in the car -- and the bonus tracks are very cool -- but for more serious listening its not really the way to go.

On the new 192 kHz / 24 bit HD Tracks download version of Blues For Allah from the virtual boxed set -- The Complete Studio Albums Collection -- you can turn up the volume and push air like out of your speakers the LP without bleeding your ears. There are some real nice details popping out on this high res version. For example, on "Help On The Way," the left-right interplay between Bob Weir and Jerry Garcia's guitars is really distinct. Now you can hear more of Keith Godchaux's grand piano resonating in the room in which it was recorded. Likewise, Phil Lesh's bass breaks are remarkably lifelike, giving the listener a very clear sense of amplifier tones he was getting there (as opposed to just hearing the low bass sounds and the physical lines he was playing -- this is where it gets hard to write about this stuff, folks!). 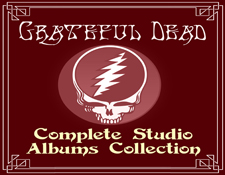 Going back to the CD version, there you can start to hear some of the details that got a somewhat covered over in the noise-floor of the LP version, such as the reverb drenched, rather liquid counter-rhythm guitar hits (probably by Bob Weir) on "Crazy Fingers." The little finger bell hits also become more apparent on this version as well.

These details are all but lost in the fine sounding LP's mastering. It is not a bad sound there, mind you... but on each subsequent version you are hearing more of the music that was originally recorded.

When you jump over to the 192/24 HDTracks version -- which was created via Plangent Processes wow-and-flutter reduction technology -- those fine details become much more apparent still. The bells ring out more audibly in rich harmony for 4-5 seconds instead of just appearing as a sort of ping-ing accent. Now you can make out the neat (probably) palm-muted plucked low guitar sting melodies (perhaps these parts were double-tracked by Phil Lesh -- they are so closely intertwined with the low bass parts, it stands to reason...)

On Jerry's solo during "Crazy Fingers" you can feel the delicacy in his playing as he thoughtfully picks out his improvisation, while Keith Godchaux complements him on piano toward the end.... along with those now distinct bells!

I'm hearing stuff in this recording I never noticed before.