By the time 1967 happened and the youth of the world began to drop out, turn on and float upstream, The Beach Boys -- and their fearless leader Brian Wilson -- had pretty much done and seen it all.  Well ahead of the curve, when the rest of the world was getting weird 'n woolly, from LA's freaky style-y Sunset Strip to hippie-infused San Francisco, Brian and the Boys were already stripping things back to basics, a tactic which others like The Beatles and The Band pursue a year later. For The Beach Boys, this decision was as much a matter of survival as artistic direction. 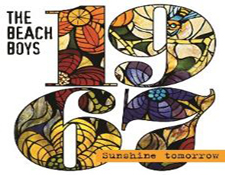 This music is the basis for a new archival Beach Boys release series, created by Universal Music Group on the Capitol Records label.  1967: Sunshine Tomorrow features the first ever true stereo mixes of their 1967 home-brewed album Wild Honey as well as outtakes from those sessions (as well as from its precursor, Smiley Smile!). You also get a selection of tracks from aborted live albums that were at one time being considered for release. There is also a companion vinyl release of the Wild Honey album for the first time in true stereo.

A bit of background might help to explain the significance of this music and why a restoration was not only warranted but long overdue. After the big push to superstardom culminating in the Beach Boys' international smash hit "Good Vibrations," things more-or-less imploded for the band in many ways. Its too much to explain in the context of this review, but lets just say they regrouped, scaling back their energies for several years and more-or-less sitting on the sidelines of pop celebrity while the rest of the world flew their freak flags high and wide.

Part of this change involved stepping away from the big studio environment which The Beach Boys grew up in, so the albums Smiley Smile and Wild Honey were recorded primarily in Brian Wilson's home which had been converted into a recording facility. This enabled the band to work at their own pace in comfortable surroundings. Some of the recordings during this period were done partially at a formal recording studio in Los Angeles.

And there in lies one of the rubs underlying these recordings. Charming and whimsical though they may be at times, the sonics were always a tad erratic and thus (probably, and I am admittedly guessing here) likely required a fair amount of mastering wizardry to get all the tracks on the album to play uniformly and pleasingly.  Additionally, since Brian and The Beach Boys only delivered a Mono master recording to the label at the time -- Stereo was an emerging thing then -- Capitol Records subsequently used their own proprietary process to make a sort of faked Stereo edition. There was never a true Stereo mix of Wild Honey (despite the album cover indicating that there was a stereo record inside!). More on that in a bit. Accordingly, the album always sounded fairly murky and overall a bit boxy.

Fortunately, most of that is a thing of the past thanks to this fine new first time true Stereo edition of Wild Honey, available on CD and high quality 180-gram audiophile vinyl. Overall the music sounds pretty fabulous, with a clarity and punch only hinted at in the original LPs.  This is especially true on the more stripped down tracks like "Country Air," "I'd Love Just Once To See You" and "Let The Wind Blow."  The pressing is quiet and features period-accurate (rainbow style) Capitol Records labels.

There is only one place where the audio gets a little curious -- dare I say "odd?" -- sounding and that is on the hit song "Darlin'." There is a subtle effect on Carl Wilson's voice throughout the tune which becomes a bit of a distraction (at least to me and a Beach Boys fan friend of mine). Its not an error in the recording as far as I can determine. In fact, upon closer listen to the original LP (as well as the "two-fer" Smiley Smile / Wild Honey CD from 90s), that sound -- really, its a production texture of a sort -- was on the original, particularly noticeable on the vocals.  Since the recordings were fake-stereo, the offending vocal sound was sort of buried in one speaker. While I have not been able to find out exactly what is going on there, the reality is that when the vocals were broken out of that corner and presented higher up in the mix, front and center between your ears, the sound was initially a bit startling. 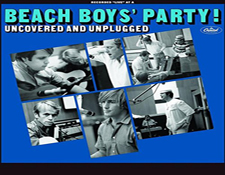 While doing a bit of semi-journalistic sleuthing (via the Wiki!), I started to realize that the difference in sound I was hearing might possibly be due to the different recording environments in which the album was recorded.  The Wiki presented some conflicting information about different studios used during these sessions. Rather than speculate, I reached out to Capitol Records/Universal Music Group and received the following reply from set producer Alan Boyd, who also provides insights into the realities of the release:

"The wiki factoid about "Darlin'" having been recorded at Wally Heider's in San Francisco is wrong. As best we can tell from the surviving original documentation and basic track session reel, the basic tracking for the song - comprising piano and bass - was done at Brian Wilson's home in Bel Air. Subsequently, horns, drums and other overdubs were recorded at Wally Heider's studio in Hollywood, where many of the tracks from the "Wild Honey" album were completed, mixed and edited. I can't say for certain whether or not the vocals were recorded at Heider's or at Brian's home.

"As for the supposed "stereo" LP of "Wild Honey" that was issued back in 1967, with the designation "For STEREO phonographs" on the album cover, that was actually mono reprocessed into what Capitol engineers listed as "Pseudo Stereo" on the original master "ST" master tapes found in Capitol's archives. The Beach Boys only delivered a mono master to the label back in 1967.

"To be precise, the pseudo stereo master for "Wild Honey" wasn't actually "Duophonic," which was a proprietary Capitol Records process that incorporated a slight delay between the left and right channels along with separate EQ and filter settings for the two channels. In the case of "Wild Honey" (and also the group's earlier "Smiley Smile" LP), the "stereo" edition was rechanneled mono, one side emphasizing high frequencies and the other boosting low frequencies. It sounded pretty awful on headphones!"