The other night I saw a show which answered a question I've wondered about from time to time when listening to synth pop type music: can robots boogie? 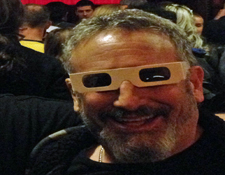 For the most part I have avoided seeing synthsizer-only groups in live settings due to the frequent disappointment I've had realizing that many groups are simply triggering pre-programmed MIDI sequences and thus aren't really "playing" their music live. What's the point in that, I think -- I'd rather listen to the studio recording in the comfort of my home if that is all that they'll be doing.

That said, I was really pleased when a friend invited me along to see German synth pop pioneers Kraftwerk in concert. I was actually very happy with the concert and performance which (a) generally sounded real good (b) seemed to really be played and manipulated live in the moment by the four musicians on stage and (c) was surprisingly a lot of fun! 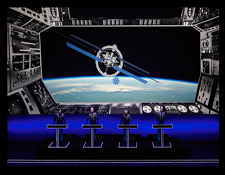 Before I get into a bit about the concert I want to discuss the really big visual deal about this show: it was the first "concert" I've ever seen presented in 3D! This probably wasn't the first ever 3D concert (I think Primus did it it recently), this was probably one of the largest scale applications of the technology to date.

Now, 3D has had a dubious history in the movies, with some wonderful peaks and some awful valleys along the way. Likewise, 3D TV hasn't faired particularly well from everything I've read over the years; like a lot of people, I don't have a 3D-ready television as I'd just purchased my first Plasma TV just as 3D was being launched to the consumer market. 3D was issued too early in the big screen TV product life cycle.... way too early.

But I am not a 3D hater. I think 3D can be cool and I have enjoyed some of the 3D movies I have seen in the theater, from Up to the new Superman flick.

However, the notion of seeing a concert in 3D has greater appeal, especially for groups as visually oriented as Kraftwerk, which rely a lot on projected video to add a surreal dimension to their performance. 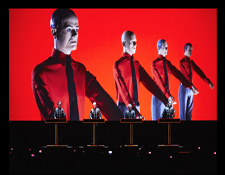 The process of experiencing 3D at the concert was similar to going to a movie -- upon entry there were attendants handing out a nice commemorative packet which holds the 3D glasses. Thus even before the start of the show, the glasses made a great addition to the vibe of the show -- I mean, it felt simultaneously neon 50s-retro and dark Devo-future-esque seeing all these people walking around with 3D glasses on!

The band wisely opened the show with their hit "Robots," and there were really impressive scenes of the robotic version of the band doing what robots do: standing still and , slowly moving their heads and hands around into the crowd.

The night was very much filled with many of these trippy "Ooooohhhh... Ahhhhhh....." kinds of moments as old school 8-bit style numerics and music notes flowed and pulsed around your head.