The Gourds and Grisman - Two Great CDs from 2001 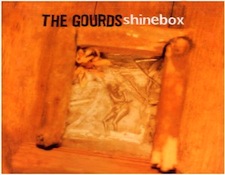 I have a new favorite band. They're called The Gourds. Imagine a countrified fire-breathing mandolin-driven version of Los Lobos and you have a vague inkling of what The Gourds are like. Shinebox has a somewhat convoluted origins. It was formerly a 7 song EP of live material called Gogitershinebox produced for an Amsterdam radio show. Five more songs were added for re-release in the 'States. Three original songs join covers from such diverse sources as Townes VanZandt, Billy Joe Shaver, David Bowie, Grin, and Snoop Doggy Dog. Yes, the Snoop Doggy Dog. This number, occupying the lead-off position of the album, is transformed from a rap tune to a redneck anthem. The Gourds version also connects the dots from Robert Johnson to Roosevelt Sykes to Muddy Waters to Chuck Berry to Snoop Doggy Dog. The Snoop just presents a graphic X-rated version of Johnson's devil's bargain.

The Gourds version of David Bowie's "Ziggy Stardust" is equally revelatory. Instead of glitter, Ziggy is covered in cow droppings; it doesn't get any more organic than that. Be forewarned that several songs, both originals and covers, have crude and graphic lyrics. Tipper Gore's parental guidance stickers would be appropriate for Shinebox.

Unlike many "groups" the Gourds are very much a band, not a lead guy with some sidemen. Everyone in the  band sings, and they all play at least two instruments. Kevin Russell plays mandolin and guitar, Jimmy Smith handles electric and acoustic bass, guitar, and percussive embellishments (don't ask), Claude Bernard contributes accordion, guitar, and B-3 Organ, Keith Langford delivers drums, maracas, tambo, and various other percolations, and Max Johnston nails down fiddle, banjo, and resophonic guitar. Produced by the Gourds along with Mike Stewart, the sound varies from damn-near perfect to just this side of abysmal. On the live cuts, like "Omaha" or I'm Troubled" the sonics are superb, so close to real live sound that you'd swear some drunk with beer breath is about to sit in your lap. Other selections, like "Jones, Oh Jones", sound like it was done in a really primitive home project studio. Yuk.

Ever since I got this CD, I've been trying to wear it out. I'm so jaded that usually a CD is lucky to last a week in heavy rotation before it gets alphabetically filed. Shinebox is a rare exception. This CD is so much fun, so thoroughly cool, so musically essential, that it has been living on my CD player. I even got more than one copy so I don't have to hunt around for it. I dare you to listen to it just once. 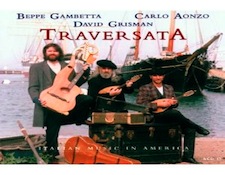 If someone told me ten years ago that I'd love a CD made up of old Italian songs I would have told 'em they were nuts. But David Grisman, Beppe Gambetta, and Carlo Aonzo have assembled one of the most infectiously charming CDs that I've heard in some time. What makes it so good? First, the tunes. Songs by Giacomo Pucini, Pasquale Taraffo, Pietro Mascagni, Nick Lucas (yes, he was Italian), Nino Rota, Raffaele Calace, and that ubiquitous "Traditional", fill this disc with lovely lilting melodies. Then there's the musicianship. These superlative pickers could make "Mary Had a Little Lamb" musically interesting. Finally, they play wonderful instruments like Beppe Gambetta's Antonello Saccu 14-string harp-guitar, David Grisman's Gibson K-4 mando-cello, and Carlo Aonzo's Pandini bowl-back mandolin.

If forced to choose my favorite selection on Italian Music in America I'd give my vote to "Duo for Two Mandolins" by Rudy Cipolla. This selection just reeks with gentle garlic-flavored musical inflections. My second choice is the tremolo-laden "Valtzer Fantastico" by Enrico Marucelli. Carlo Aonzo's precise and elegant mandolin technique is perfectly syncopated with Beppe Gambetta's harp-guitar accompaniment.

It's almost gotten to the point where you can take Acoustic Disc's superb sound for granted. Once more Dawg studio engineers Dave Dennison and Paul Stubblebine have created a CD that gets closer to the real sound of acoustic instruments than 99.9% of all the other recordings you'll hear. Played over a high end sound reproduction system (boom-boxes need not apply), this recording gets amazingly close to recreating the live musical event in your room. Like wow, man.

Perhaps I'm just getting old, because music that would have been too hokey for me to enjoy in my youth is finally catching up with me. These "Sins of My Old Age" as Verdi called them, are less fattening than chocolate, but just as infectiously sweet.