The Nostalgia Of A Turntable

My earliest memory of a turntable was the "record player," as they were then called, that my brother worked and saved his money to purchase. It was portable and could play both 45's and LP's. It had a plastic adaptor to snap in a 45 so the record would fit the spindle. There was also a cartridge upon which a stack of 45's could be loaded and the player would drop and play the first record, then next one and so on. My brother would get lost in his bedroom listening to the Kingston Trio and Frankie Avalon. 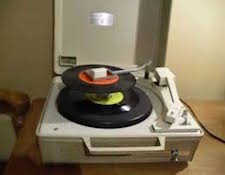 Because he was my older, and at the time, bigger brother, he always enjoyed waiting until our parents were both gone and then chase me through the house. When he finally caught me, he would pin me to the floor and tap on my chest repeatedly until I "gave up" or started crying, usually, both. Back then; we called them "umpadillas."

Because at about eight years old I was too small to retaliate physically, I used the only available retribution open to me that I could think of. I snuck into his bedroom one day, pulled the record player out of the closet, and proceeded to destroy it. "Needles" were replaceable on this unit so it was the first to go. Tonearm's make a perfect handhold so I yanked it up and backwards at the same time. Soon after that, my Mother discovered what I was doing. I don't remember the punishment inflicted upon me by my Father but I'm sure it was not pleasant. I also don't remember what happened to the record player. In any event, it was sweet justice for being subjected to umpadillas.

Nostalgia is a word commonly associated with a turntable. We love to talk about the "nostalgia of a turntable." I remember the tables of the 1970's like the Linn Sondek LP12. Simple, elegant, attractive wooden base, and they sold boatloads of them. Then there were the Thorens and Garrard turntables and of course, the Acoustic Research XA. All of these tables had a very simple, ergonomic design and a wooden plinth (non wood plinths were also available). Some turntables of that era also did something I wish modern tables would do - pick up the tonearm at the end of the record. I understand why most modern tables don't but it would sure be nice if they did. Particularly for those like myself who find it quite easy to get distracted and forget that the last song on the side just started - then jump with horror when the realization occurs that the needle is riding against the paper label. 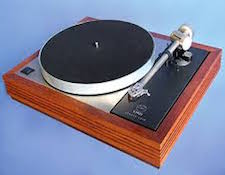 Today, we have replicas of nostalgic tables of yesteryear. The VPI Classic series comes to immediate mind. Harry Weisfeld once told me at an audio show that he designed and named it the Classic Series because he wanted his own version of those wonderful products of forty or more years ago. Given the popularity of the Classic series, I'd say he hit the mark perfectly.

Nostalgia aside, turntables, especially the upper echelon turntables, have become as much it seems about visual design as playback design. We now have available from manufacturers all over the world designs far removed from the simple wooden plinth type of deck from thirty or forty years ago. Manufacturers have seemingly abandoned simple and elegant in favor of monolithic metals, exotic woods, and acrylic materials. Anyone who has ever seen the Clearaudio Statement turntable knows precisely how far removed turntable design has strayed from a simple wooden base deck.

Because their design is rarely about visual acuity exclusively, and more about sonics, most of these abstract turntables are not only musical works of art, they do offer a particular type of visual artistry. For whatever reason, people seem to notice a turntable first when they first see a system. For instance, I've had several people, whereupon first entering the room, make a comment about my turntable before anything else. I find this quite surprising as I have a VPI Classic Signature turntable and not some ultra modern thing. I can only imagine what would be said if someone walked in my home to see all 771 pounds of the Clearaudio Statement sitting there. 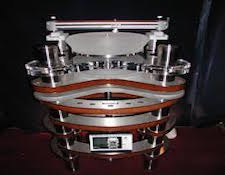 Nostalgia is a term commonly associated with a turntable. The designs that many of us grew up with from the 1960's and 70's have given way to designs that look like something from a distant future. Fortunately, they all have the ability to render an LP in a way that is every bit the auditory marvel as the design is the visual marvel.

So are the metal and acrylic turntables of today the very design that will be viewed as "nostalgic" forty or more years from now? Will the audiophile of tomorrow look with favor on the modern tables of today and wish longingly for a hint of the past? Perhaps. Maybe we have gone as far as the current design will take us. Maybe LP playback won't exist forty or fifty years from now. Maybe it will have years earlier ceded its popularity to a new and different form of playback of some as yet to be invented technology.

In any case, analog playback is essentially viewed as nostalgic while at the same time the design of modern equipment is quite cutting edge. That would suggest we have nostalgia and modern at the same time. No matter which style an audiophile chooses - the wooden plinth throwback or the modern chrome and acrylic version, and for the foreseeable future, analog playback will be enjoyed for the sonic marvel that it is - unless of course you have a little brother with vengeance on his mind. In that case, hide the tonearm because even modern ones can be broken.