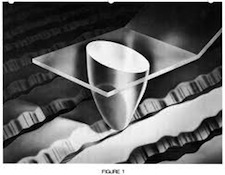 Stereo moving-coil cartridges work, just as the name implies, by moving a pair of coils (one for the right channel and one for the left) within a magnetic field to break the field's magnetic lines of force and produce a voltage, which gets sent off to the system's electronics to be amplified and ultimately to come out of its speakers as music. The magnet(s) is/are inside the body of the cartridge and the coils are mounted to the cartridge's cantilever either before or, more usually, after the cantilever's pivot, which is some distance behind the stylus, which is also mounted to the cantilever. When the stylus is dragged through a record's groove, it's caused to move back-and-forth and up-and-down; which moves the cantilever on its pivot; which causes the coils to move in the same patterns as the stylus (although backwards, if the stylus and the coils are, as they usually are, on opposite ends of the cantilever); which breaks lines-of-force; which produces a signal voltage; and so on.

Among the reasons that Grado may have had for not putting too much faith in the moving-coil design is that it's got some potentially serious problems regarding mass and output. The physically smaller the coils are, and the fewer the number of turns in their windings, the lower the output of any moving-coil cartridge will be, and the more amplification it will require to make its output usable. Except with the very finest electronics, very low output can be a problem, but so can its solution -- a bigger set of coils with a greater number of turns. 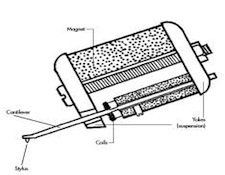 Whether or not their frequency-response works to their benefit, one thing about most moving coil cartridges that's NOT an asset is their output level.  In the OLD, old days of playing-back phonograph records electronically, the cartridges that were used were made with Rochelle salt, a piezoelectric crystal that, when bent or compressed, produced a voltage - in some cases, as much as two full volts -- and, because their naturally rolled-off frequency-response was a fair complement to the high-frequency "boost" that records were recorded with, required little or no playback equalization. Those "crystal" cartridges were first replaced by ceramic cartridges that worked on a similar principal, but were cheaper and easier to make and, though their output was less, was still quite sufficient to drive an amplifier without help or equalization. Next along came the magnetic cartridges - specifically, the trend-setting "Variable Reluctance" cartridge by General Electric, which while it offered a whole host of advantages, including better sound and greatly extended record life, was VASTLY lower in output (at around 10 millivolts, its output was less than 1/100th that of earlier crystal or ceramic models), and had to be amplified and equalized before it could drive the amplifier that would eventually get its output up to speaker-level. (Hence the need for a  "pre-amplifier", which when it first came along was just a simple one-tube device for equalizing the few millivolts of output of a low output magnetic cartridge and bringing it up to a level (line-level, or the equivalent of about one volt), where it could be fed to an amplifier to drive a speaker (Remember that this was all still back in the mono era). 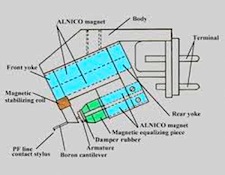 From the simple "pre-amplifier" it was not too long a step to get to the modern "preamp" - a multi-stage, multi-function device descended from it, that includes, at the very least, one or more low-level phono inputs; one or more line-level inputs; an input selector switch; a volume control; and probably (unless there are two separate volume controls) a "balance" control for making sure that the output levels to the "main" amplifier sound the same for both channels.

Whereas the initial one-tube pre-amplifiers offered anything from about 12 to about 20 dB of gain, modern preamps feature gain of as much 80 dB, and offer cartridge "loading" -- resistive and sometimes even capacitive -- at a broad range of values. This is necessary because, unlike current moving magnet or moving iron cartridges, which all tend to have multi-millivolt outputs and seem all to call for a load impedance of 47k, moving coil cartridges vary WIDELY in output - all low, but surprisingly many with outputs as little as 0.1 millivolt (TWO ORDERS OF MAGNITUDE BELOW THE EARLIER G.E. MAGNETICS) - and can require resistive loading as little as just a few Ohms and, in some cases or with some phono cables, capacitance values so wildly ranging that some preamps actually provide a slot for wiring-in a capacitor of whatever value you may choose.

What this has done is several things - some of them technologically thrilling; many of them producing genuinely better sound and greater enjoyment of our hobby; but not all resulting in anything like "more bang for our Hi-Fi buck".