There are some definite perquisites from being in the high-performance audio business as long as I have. One of the primary ones has been the opportunity to know some of the "audio legends" and great minds in the audio world. Near the top of that list is Nelson Pass, who I've known since back in the days when he was still designing power amplifiers for Threshold. Over the years I've heard and reviewed several of his iconic designs, such as the first Pass single-ended class A power amplifier, the Aleph 0. 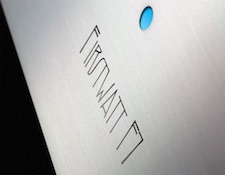 Recently Pass Labs took over the production and distribution of Nelson's "hobby" company, First Watt, who are known for low-power, minimalist, single-ended class A power amplifiers. One, in particular, the F7, piqued my interest, but it had already been reviewed by all the publications that I contribute to, so I could not request one for review. But occasionally, very occasionally, I am so interested in a component that I will request it for audition, and that was what I did.

As I mentioned earlier, I'm quite familiar with some Pass power amplifiers, including the Aleph 0, which I reviewed and owned for several years, and the Pass X-150.3, which I have used as a reference for over fifteen years. But I had not had an opportunity to hear any of Nelson's First Watt designs. I was especially interested in hearing how well the F7 would mate with several of my desktop loudspeakers, including my desktop reference, the Audience 1+1 V2, and Dali Opticon 1 (currently under review for Home Theater Review). 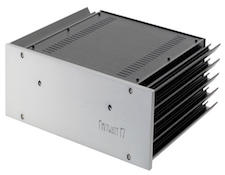 The F7 arrived in late august and I immediately installed it in my desktop system, which at the time consisted of my MacPro desktop tethered to the Mytek Brooklyn DAC which was my primary input in the SPL Phonitor-X headphone amplifier and preamplifier, which fed the Pass F7. My desktop system is set up so it resides directly under my desk. Which leaves the front panels of the components about four inches away from my knees. After hooking everything up I turned on the F7 and began listening.

The power amplifiers that had been previously ensconced in my desktop system for the last couple of months were all digital power amplifiers, so going to the F7, which is a class A solid-state analog design was a major change in both sonic perspective and ergonomics. Sonically, the Pass offered a deeper and more dimensional soundstage as well as a slightly warmer, and more harmonically complex midrange even when it had only been operating for ½ hour.

After two hours of continuous listening I turned the Pass F7 off, not because it didn't sound superb (because it did), but because I was down to wearing nothing except for my shorts and my knees were beginning to smolder...well obviously that last bit is an exaggeration, but let me tell you, my primary listening spot had gone from being comfortably cool to damn hot in two hours due primarily to the F7 class A design, which generates enough heat to qualify as a space heater. 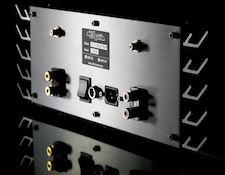 How hot can the Pass F7 get? The word "untouchable" sums it up. After a couple of hours of being operational there is virtually no part of the amplifier that you can remain in contact with for more than about four seconds. In a room-based system, where you can have some air around the amplifier and some distance between you and it, it really isn't a problem, but in close quarters, it is a textbook definition of class A hotness.

By now you are probably thinking, "dumbass, just move the amplifier farther away from your knees." In my set up that is easier said than done - the system is set up so that I can use short ½ meter line-level cables and a 1 meter USB cable, and the power amps have only a couple of inches wiggle-room in placement options. So during the summer, when my office is usually somewhere between 74 and 76 degrees, in two hours the Pass F7 boosted the temperature to the low 80's in its immediate vicinity.

In my last house I had a smaller office. I soon learned that some power amplifiers, such as the Accuphase P-300, had to be "winter amplifiers" because they generated enough heat to keep my office warm even in the depths of winter. The Pass F7 definitely qualifies as another winter amp.

Is there a takeaway from all this? Sure, there is. Sometimes a component just doesn't fit into a system, not because it isn't well-made, well-designed, and an overall good product, but because it is not compatible with your current set-up. Class A amplifiers are a case in point. If you have the room for proper ventilation and don't mind the heat, class A offers certain sonic advantages that are hard to match with other technologies. But if you need a power amplifier that can fit into a close quarters with limited ventilation a class A power amplifier may not be your best ergonomic option...