Do You Remember Your First Stereo? 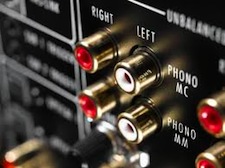 Recently one of my Facebook friends asked the question, "What was your first home theater system?" For me, that was simple - A Sony 36" XBR I bought from J. Gordon Holt nestled between a pair of Quad ESL-57 speakers driven by a Marantz 8B. I had a pair of subwoofers I modified for the Quads. The subs started life as a pair of Cizak MG-10 subwoofers, but after a Crown DC-300 decided to pass DC which fused the original driver's voice coils to the point where they were frozen in place, I replaced the drivers, pulled out the crossover, and re-stuffed the enclosure. I also had the Quad ESL 57's mounted via turnbuckled tension wires on top of the Cizaks so I could precisely angle the Quads back for better soundstaging. Rear surrounds were a pair of Paradigm Atoms. The surround sound processor was the Lexicon DC-1, which I kept for several years.

But that was too easy. What about my first stereo? Fighting my way through the cobwebs of the 70's, it's coming back to me now...I bought my first stereo from Sam Goody's and it lasted less than ten minutes before the Scott receiver let its smoke out. Goody's replaced the Scott under warranty with a Harman Kardon Nocturne 330 receiver, which continued to soldier on for many years. The rest of the system consisted of a pair of EPI 100 speakers and a Garrard automatic turntable with a Shure cartridge.  Cables? Zip cord and cheap manufacturer-supplied RCA cables.

So how did my first system sound? It must have been able to play pretty loud, because I remember almost wearing out my copy of the first Led Zeppelin album on that system. But the turntable couldn't have been that destructive, because I have the first jazz album I ever bought, Gary Burton's Duster and it still plays fine and sounds more than acceptable on my current VPI TNT III turntable. Also the system couldn't have been too low-rez, because I could make out all the words on The Mothers of Invention's Freak Out LP. "Suzy, Suzy Creamcheese?"

I do know that my first exposure to audio ecstasy came via this decidedly pedestrian stereo system. The tabs of orange sunshine probably didn't hurt either. But regardless of how good or bad this system sounded, I'll always have a soft spot (probably not the only one) in my heart for that Harman Kardon Nocturne and those EPI 100 speakers...

What if I were 15 year old tomorrow? What would my first system look like? Well I suspect, judging by my two nieces, that it would not be a room-based system, but a personal portable system instead. Both of my niece's first stereo systems were iPods with stock headphones. Can this deliver any kind of musically ecstatic experience? With good headphones, I think the answer is yes. But with stock headphones...err, a tenuous maybe.

So, do you remember your first stereo?

I won't count the Panasonic all-in-one with detachable speakers real wood, and a built in turntable on top of the receiver section. My first real stereo - at around age 16 - was an Onkyo integrated amp, Bose 201 speakers and a Garrard turntable. The Garrad got traded in pronto for a Lenco turntable( same manufacturer as Thorens but less well known) with Shure M91 ED cartridge. That system needed a bit more transparency at the top end but had an incredible soundstage and imaging in small rooms (my 8x11 bedroom at home and a college dorm room that was even smaller.) Played loud and sounded great. Mahavishnu Orchestra's Inner Mounting Flame, Jimi's Electric Ladyland, the eponymous King Crimson debut album.... I listened to all of it on that system and remember it like it was yesterday.

I also began with the aformentioned Panasonic all-in-one, which my father STILL has in his garage, last time I looked.

But with Tech Hifi's generous trade-in policies, I quickly went from a Marantz 2265b through Micro Acoustics 2a's to Crown IC/D 150 separates through Infinity Q5s. There WAS a quick blast at first through a JC Penney-branded Matsushita receiver, but it kept blowing the Micro Acoustic's tweeters and even the Infinity's midranges.

So I guess I tried to improve the speakers before I learned my lesson about electronics. I'm still friends with the fellow who ran Michigan's Tech Hifi service center...he worked with me at an upscale electronics joint north of town afterwards.

But thinking about it now...by sophomore year I had the Crown and Infinity stuff, with a Thorens TD-165 turntable and Ortofon MC cartridge and head-end. At today's dollars, that $3k or so worth of stuff would be worth what...$10,432.32 last year?!

Whoa. I guess I knew then what I'd be doing now. LOL.