The Rise of In-Wall Loudspeakers 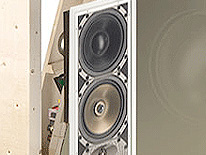 Some years ago the thought of building a high-end, two-channel system around a pair of in-wall loudspeakers was tantamount to punching the Pope. Among audiophiles-it just wasn't done. Fast-forward to today and not only are in-wall loudspeakers more common, they're also damn good.

Case in point, six years ago, when I bought my first house, I had had it with cumbersome, often ugly, "flagship" loudspeakers. For years if it was big, square and heavy (not to mention expensive) it was someone's reference and as such it was my duty to hoist said speaker up the stairs of my then Silverlake condo in order to review it. Frankly after a mere 18 months of this routine my back, sanity and patience had run out-hence the hunt for a new, single story home. I purchased the house shortly before CEDIA, which was then being held in Denver, Colorado (where it should've STAYED). At CEDIA I met some of the folks over at Meridian  and they showed me their new line-up of active and passive in-wall loudspeakers-the 300 Series. I was so intrigued that I ordered up a full multi-channel setup of the now discontinued 300 Series in-walls to serve as my reference home theater and two-channel speaker system.

To be completely frank, while the installation was a bit of chore the five plus years I spent with them was nothing short of a match made in sonic heaven for they sounded as good and in many cases better than a lot of the floor standing speakers that came in for review during their tenure. Truthfully, I don't know why Meridian discontinued them for they were absolutely stellar performers, capable of producing a detailed, open and enveloping soundstage that extended front to back (yes, I said back) and side to side. The ribbon tweeter the 300 Series employed was sublime and remains on my list as one of the finest high frequency transducers I've ever heard. The bass was copious though firm and controlled but it was the 300's midrange that sealed it for me-just beautiful.

Since then I've been a proponent of in-wall loudspeakers and feel that they've reached a level of performance, that where it counts, is equal to many of their floor standing brethren; provided you do your homework and select and install the right ones. Not to mention, those of you unable to have a dedicated listening space will garner zero complaints from your significant other over wanting to "hide" your beloved speakers in the walls or better yet, the ceiling.

So if you're willing to take a leap of faith and consider in-walls or in-ceiling speakers as your two-channel loudspeaker of choice I thought I'd help you out in your quest with a few of my favorites that I've encountered in my travels. Of course my list represents only a smattering of options currently available; and to those in-walls and/or manufacturers who don't make my list, your omission is not a stamp of failure or poor quality it simply an omission for I haven't personally heard your in-wall speakers...yet.

In no particular order here are some of my favorite in-wall and/or on-wall loudspeakers that I believe can act as true left and right mains in a budget, mid-fi and even cost-no-object audiophile system.

The L-82s retail for $699 a pair where as the L-85s are $349 each. Both feature eight-inch Kevlar midrange drivers a-la Bowers & Wilkins mated with a single one-inch soft dome tweeter. The L-82s are in-wall designs where as the L-85 LCRSs are in-ceiling designs featuring a 15-degree downward angle for proper stereo imaging from an in-ceiling loudspeaker. I currently employ a full compliment of L-85 LCRS loudspeakers in my master bedroom system and I have to say that for the money, ease of installation and customer support they're hard to beat and that's before you hit play. Playing back music via something as inexpensive as an Onkyo receiver the Noble Fidelity speakers fail to disappoint, in fact they are bar none the most musical in-ceiling loudspeakers for the money that I've encountered thus far. For those of you wondering does the 15-degree angle work? In a word, yes. Yes it does.

As cool and revolutionary as Wisdom Audio's new LS3 and LS4 on-wall loudspeakers re their Sage Series in-wall speakers are still the reigning king of all things in-wall; capable of producing a musical experience that is both bold and delicate thanks to their efficiency and driver compliment, which combines planar magnetics (for the treble and midrange) with multiple, smaller diameter dynamic drivers. While the Sage Series loudspeakers may be expensive (starting price is a little north of $10,000) and require some specialty electronics the end result is nothing short of astonishing. Truthfully, if you're in the market for say a pair of Wilson Audio Sasha W/Ps or even MAXX 3s but you're having a hard time convincing your significant other to allow them in your living room you owe it to yourself to find a Wisdom Audio dealer for the Sage in-walls are that good.

Retailing for $2,999 each plus $399 for the required backbox the SIG-LCR 5 in-wall speakers are every bit as good as their floor-standing counterparts, the Paradigm Signature S8s. While the Signature S8s are hardly ugly or cumbersome the SIG-LCR 5 is sex-on-a-stick for no in-wall speaker comes closer to matching every aspect of their floor-standing cousin's performance than they do. If you're in the market for a pair of Signature S8s but can't really afford the floor space I highly recommend looking into getting a pair of SIG-LCR 5s.

Technically the CT700 Series loudspeakers are not in-wall loudspeakers in the traditional sense, however they CAN be mounted in a wall, or custom cabinet etc. if you're so inclined. Of course Bowers & Wilkins makes some fine in-wall loudspeakers and those too should probably make my list however I have not heard them so I cannot personally vouch for their performance. What I can vouch for are the CT 700s, specifically the CT 7.3 and 7.5s, which retail for $1,500 each and $600 each respectively. The CT 700 Series loudspeakers are Bowers & Wilkins lower-end, custom line of loudspeakers designed to be installed into cost-no-object home theaters and media rooms, specifically behind perforated projection screens, however I'm going to let you in on a little secret-they're one hell of an audiophile speaker if you give 'em a chance. Capable of aural pleasures that beguile their homely appearance and affordable price tag; the CT 700s served as a reference loudspeaker along side my costlier Meridian 300 Series in-walls for more than a year.

Sadly the Meridian 300 Series in-wall loudspeakers are no longer with us and both the audiophile and home theater community are worse off. While I'm not certain how many pairs were sold when the 300s were new, if you come across a pair on the second hand market and are willing to tear open your walls to accommodate them you can rest easy knowing you're the new owner of the best in-wall loudspeakers ever made. Period.