The Most Famous Speaker in the History of Rock 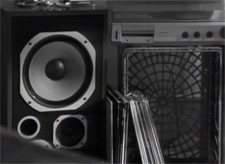 haven't seen the video, it's classic Replacements. The band's videos were more like anti-videos; they had little or nothing to do with the song, and little or nothing actually happened in the videos. The entire "Bastards of Young" video focuses the camera on one 1970s-vintage speaker. Barely anything happens until the end, when the seated listener gets up and kicks in the speaker's woofer. The band used almost exactly the same video -- without the speaker destruction -- for "Left of the Dial" and "Hold My Life."

At least for anyone who grew up in the 1980s, this must be the most famous speaker in the history of rock. Wait, what's that I hear you saying? What about the one in the Maxell commercial? Well, that speaker was playing Wagner. Which is not rock.

I got onto YouTube so I could watch the video for the first time since the early 1990s. The speaker looked vaguely familiar, something like the classic JBL L-100, but different. Stumped, I e-mailed a still from the video to my friend Gordon Sauck, proprietor of Innovative Audio, a large vintage audio dealer in Vancouver, BC. He recognized it immediately.

"It's a Pioneer HPM-100B," he replied. "I told you the story behind that speaker, didn't I?" A few minutes later I got the whole scoop from him over the phone. Here's how the conversation went: 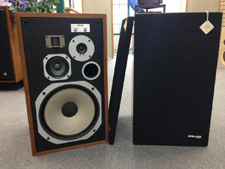 Gordon Sauck: When Bart Locanthi was VP of engineering at JBL, the last thing he worked on was the L-100 Century speaker, one of the most successful speakers of all time. The powers that be then decided to take JBL in a different direction, so in 1975 he left to work for Pioneer. He wanted to build a speaker that would challenge the L-100, and that ended up being the HPM-100B. That's the 200-watt version, and you can distinguish it by the ring around the woofer port. The 100-watt version is the HPM-100A, and it doesn't have the ring.

The tweeter came out of a speaker Pioneer did called the HPM-200. It was ugly as hell and didn't sell well. But it had this HPM tweeter, which stood for High Polymer Mylar. Locanthi saw that tweeter and decided to use it. The HPM-100 ended up being incredibly successful. There was later an HPM-150, with a 15-inch woofer.

Brent Butterworth: What's it worth?

GS: Stunning. I have the HPM-150 in my own listening room. It sounds like the other JBLs of that era. It's very punchy, the bass has a lot of kick to it. The bass is almost perfect. It's a very, very open-sounding tweeter. It's hard to describe the sound, but people who own them very rarely get rid of them.

BB: How easy are they to find?

GS: You can find them on eBay, but the problem is often that if the drivers stop working people just swap them with something else and it doesn't sound as good. Finding a set with the original drivers, where the drivers are all working properly, is getting hard. We have a set in the store now, but they're so nice they're really close to coming home with me.

GS: Must be a pretty bad song if it makes you want to destroy the speakers so you won't ever hear it again.