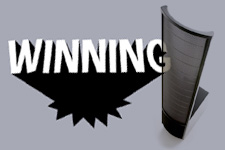 The other day a pair of MartinLogan's new ElectroMotion ESLs arrived for review. Retailing for $1,995 a pair the ElectroMotion ESLs are the fifth loudspeaker I've reviewed, this year, that have come in under five grand a pair. Normally, manufacturers send me their flagship offerings, often costing tens of thousands of dollars but lately my phone has been ringing off the hook-not to review uber high-end products but more sensible ones.

Let's face it, in this economy; few of us have the means to just write a check for anything costing $25,000, let alone a $25,000 check for a pair of loudspeakers. Those of you who can may I direct your attention to a future article the best loudspeakers money can buy, which I haven't written yet but will just for you. Back on earth where many of us have to balance our love of audio with the daily responsibilities of life, even spending $5,000 on a pair of speakers may seem like a luxury.

Well, if I've learned anything in the past few months it's been that the sub $5,000 market is heating up and is producing products- especially loudspeakers- that are far more exciting than most everything being produced in the high-end space right now.

Another great loudspeaker bargain right now can be found in Sandy Gross' latest creation, the Triton Two, from his new company GoldenEar Technology. For those of you who may not be familiar with the name, Sandy Gross was one of the founders of both Polk Audio and Definitive Technology, two companies who have forged a reputation for building quality loudspeakers that seemingly everyone can afford. The best thing about the Triton Twos is the fact that I believe them to be Gross' best design to date and at $2,500 a pair they're also his most affordable full-range design yet.

Those of you who like to find deals on the Internet should take a look at Aperion Audio's latest flagship, the Verus Grand Tower, for at $1,798 a pair they boast Revel like looks and build quality coupled with a slightly warm and relaxed tone that make them well suited for a lot of today's music. Mate them with tubes or a slightly more up-market amp and be prepared to be amazed. Plus, Aperion offers a 30-day in-home trial; don't like 'em send 'em back-try doing that with a pair of Wilson Audio Sasha W/Ps.

Zu Audio recently released their new Omen line up of speakers and I was fortunate enough to get a pair of the largest floorstanders in the line, the Omen Defs, for review and was very impressed. The Omen Def's high efficiency and full range, virtually crossover-less design, made for a compelling and infectious sound that kept me listening for hours on end, especially when mated to my single ended triode rig. For $3,100 a pair the Omen Def is hard to beat at twice, maybe even three times, the price if I'm honest.

While I know in-walls tend to be cheaper than their free standing counterparts Noble Fidelity is making some really superb sounding in-wall and in-ceiling loudspeakers lately. I personally use their L-85 LCR in-ceiling loudspeakers in my bedroom system. The entire Noble Fidelity line has a Bowers & Wilkins like sound (not to mention look with their yellow Kevlar drivers) and are exceedingly affordable and easy to install.

Speaking of Bowers & Wilkins they too have really upped their game in the sub $5,000 a pair category. Their entire 600 Series sounds amazing and their new CT 700 lineup have more in common with Bowers & Wilkins' high-end offerings in terms of sound quality then their asking price would have you believe. However, the CT Series doesn't have the same finish (note I didn't say build quality) as some of the competition but no other speaker comes closer to sounding like a mini 802 than the large Ts do.

Of course there are those who have been a staple in the affordable loudspeaker space for years, or at least long before it was in vogue, companies like Paradigm with their Monitor and Reference line of loudspeakers. Magnepan's MMG loudspeaker is another fine example of a value for dollar leader costing all of $599 a pair and sold direct via Magnepan's own website.

If the before mentioned products are any indication the affordable audiophile movement is on like Donkey Kong and judging by what many manufacturers are telling me it isn't going away any time soon. If there was ever a time to be a budding or budget conscious audiophile now would be that time. If only some of these products existed when I was starting out or in college, my student loan payments would probably look a little different. Damn you progress.