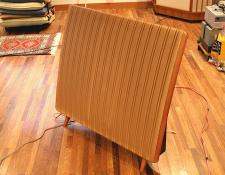 The purpose of a grill cover on a loudspeaker is pretty obvious - it protects the driver's delicate parts from trauma caused by outside influences such as fingers, dog tails, and flying elbows. Some grill covers are integral to the design and are not removable - the venerable Quad ESL 57 comes to mind as a classic example. But for the vast majority of loudspeakers, their speaker grill covers are removable, which means the manufacturer intended that sometimes the grills will be removed, but what times?

Before we can decide whether a loudspeaker will sound better, worse, or the same with the grills removed we need to look at what materials and construction methods would make a grill cover more or less audible. First, there's the material used in the grill cover. Many grill covers employ some sort of fabric stretched across a frame. And while you might suspect the fabric would have an effect on the loudspeaker's frequency response, usually the cloth itself has little effect, and if it does have an effect it is so broadband that it is not perceptible except for the need to raise the volume slightly to match the level with the grill covers removed. But even this is rare. 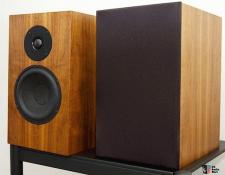 So, if the fabric does not affect the sound appreciably, what part of the grill cover does? The frame. Speaker grill cover frames are usually made of either plastic, metal, or wood. Each material has its sonic issues. Metal and plastic frames have resonant frequencies based on their shape and materials while wooden frames often introduce diffraction issues due to their shape. In some cases frames can suffer from both diffraction and resonance issues.

What is diffraction in this context? It's the reflections of the soundwaves off whatever reflective surface they strike first, which in this case would be the sides of the wooden speaker grill frame (as well as the front of the speaker cabinet itself, but that is another issue). 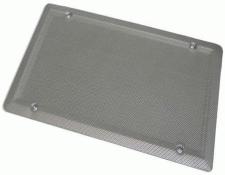 I regularly see wooden speaker grill frames that are as much as ¾' thick. And what is the sonic effect of this edge diffraction? I notice the image isn't quite as precise; especially where one instrument's image ends and the next should begin the spaces between the two instruments is not as pronounced or clearly defined.

Metal speaker grill frames will almost invariably have a particular resonant frequency that may excite them to the point of audibility. John Dunlavy used metal frames for his SC series of loudspeakers, but to avoid the resonance issues he also included a felt strip to dampen built into the frames. Even with the necessary 10-foot distance from the drivers I could hear the frames still had an audible effect that reduced their imaging prowess slightly. So, during the twenty years that I owned the Dunlavy SC-VI loudspeakers I always listened with the grills off. After a couple of years, I never put the covers on after a listening session was over. 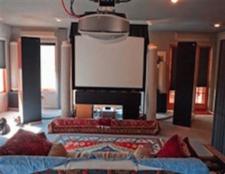 And then I got some kittens. One day they climbed the front of both loudspeakers, their little claws leaving punctures in over ½ the drivers of EACH speaker. After that event I fashioned large cardboard speaker grill covers that lived on the loudspeakers whenever I wasn't listening to them.

Yes, loudspeaker grill covers have a purpose, but that purpose is more often than not for while you are NOT listening to your system...