Some Musicians ARE Audiophiles 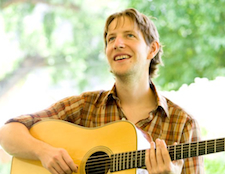 Last Wednesday I spent the afternoon at Rockygrass Academy. Usually this time of year I spend more a fortnight there as an Academy student, But last year I promised myself I'd take a year off after attending eight out of the last ten years' academies.

But, in the end I couldn't stay away, so I set up an interview with Chris Eldridge, the guitarist in the musically adventurous young band, The Punch Brothers for Vintage Guitar Magazine. During lunch we got to know each other. I was trying to avoid the subjects that I wanted to cover during the interview itself, such as old guitars and music, which is hard when two guys whose principal passions guitars and music first meet. But we quickly veered off onto the subject of audio when Chris found I wrote for The Absolute Sound and Audiophile Review.

As is all too common for many young audiophiles, Chris apologized as he told me that he wanted to be an audiophile but on a working musician's income that wasn't in the cards. But even on a severely curtailed budget Chris had managed to acquire a Rega turntable and a Cambridge Audio DacMagic DAC. Currently he's saving up for a pair of Focal speakers.While I didn't say so at the time, I was as impressed with Eldridge's savvy audio choices as I was with his extraordinary musicianship.

But, Eldridge's feeling that he couldn't afford "really good gear" is distressing. The fact is he CAN afford good gear, as the equipment choices he's already made indicated. And given the quality of what we long-of-tooth audiophiles condescendingly refer to as "entry-level" gear, there's no reason that other musicians and young audiophiles-in-waiting can't have good sound. The problem is that we "state-of-the-art" audiophiles give the entry level crowd the impression that nothing they can afford is as good as the stuff WE use. In doing so we are cutting ourselves off from the people who will, if we let them, keep our hobby alive.

And what can we do to encourage young audiophiles? First off, we can, as I did, let young'uns know that when we were their age our first systems were MUCH worse than what they can get today. Much worse. And despite the constant barrage of nostalgia for vintage gear, the plain fact was that most entry-level vintage gear sucked. Garrard turntables? Puhleeze. Their highest use was and still is as an indoor jogging platform for mice.

So the next time a budding young potential audiophile asks about gear, maybe instead of waxing poetic over the latest six-figure piece of audio art or ancient piece of crap, we should talk about that new entry-level DACs or headphones that deliver the goods. I have developed an entire "cocktail party" spiel when I get asked what I do by non-audiophiles. You'd be amazed how even non-audiophiles get interested when I mention the advances in wireless systems from Sonos, Logitech, and Apple.

Yes, we audiophiles need to spend some time making our hobby more rather than less inclusive. And the best way to do that is for every audiophile to become an evangelist for the hobby. That's how we can begin to bring new blood into the hobby. And that's what entry-level audiophilia is all about...