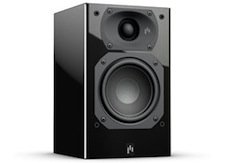 NHT   Super Zeros. Discontinued - $99 each Used $85 - $130/pr. I bought a pair of these for my master bathroom eight years ago. I still enjoy the way they sound hooked up via ten feet of entry-level installer-grade Monster Cable to my Sonos BP 120. I doubt that many speakers would still be working after such a long stint in a high-humidity environment, but the Super Zero's polypropylene mid/bass driver and soft dome tweeter function as well today as the day the speaker was installed.

Aperion 4B $130 each- On a desktop these will amaze you. They image well, and are harmonically balanced for a near-field listening environment. Compared to Aperion's earlier model, the 422RL, the 4B was slightly warmer with a smoother upper midrange and treble delivery. The 4B dives lower on the bass and rolls off smoothly, making integration with a subwoofer an easy task. Everytime I put these into my desktop system I'm reminded of how smooth and musical a budget-priced speaker can be.

The original Paradigm Atom. Discontinued - $179/pr. Used price  $80 - $130/pr I had a pair of these for years. Frankly I have no idea what happened to them. They spent several a lot of time as rear channels with my Quad ESL-57 based 4.1 small-room home theater system. What I loved about them most was their lack of additive colorations. Although the Atom's cabinet wouldn't win any awards for materials, the final results were still remarkably musical.

Yamaha YST-M7 $31.99/pr computer speakers. I own three pair of these things. I use one pair for location monitoring, one pair is on my wife's desktop, and my last pair are held in reserve for the occasion when my on-location pair fail. Ten years of use and still no failures. TheYST-M7s look cheap. They're all plastic with a five-watt built-in amp and a single 3" oval "full-range" driver. But they get the midrange right, and if not pushed too hard, sound like music. Gordon Holt turned me on to them. He also had at least three pairs.

PSB Imagine B $999/pr. If you prefer to use speakers sans subwoofer the Imagine B's will fill the bill nicely. The Imagine B's overall musicality reminds me of the Harbeth PS3-2SE speakers, but with slightly less resolution. The Imagine B is an especially low-fatigue monitor that sounds as welcome at the end of the day as it did first thing in the morning.