Is the Mirage OMD-5 Speaker the Best $150 Desktop Speaker Ever Made? 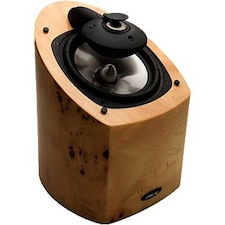 Before I answer that question let me give you a bit of background, or backstory if you will. Mirage is a Canadian speaker company that began in 1977. It was among several companies that included Energy, Paradigm, and PSB, who used the facilities at the Canadian National Research Lab to develop and refine their speaker designs. In 1996 Mirage introduced the first of their OM speaker designs, the OM-6. Since then the company has continued to refine their Ominpolar™ technology.

In 2006 the Klipsch Group acquired Audio Products International Corp, Mirage's parent company. The first change they made was to move Mirage into more mass-market retail outlets. Since then Mirage line has evolved from specialty product manufacturer to a purveyor of mid-priced offerings. What has not changed is the best part of Mirage's core technology.

Nowadays if you want to buy Mirage speakers on the Internet you have one choice - Vanns. They have become the exclusive dealer for Mirage, at what appears to be blow-out prices. The OMD-5 speaker had an original suggested list price of $399 each, although Vanns sells them for $169.88 for gloss black finish or $149.88 for rosewood or Oak. That's quite some discount!

Three weeks ago I got an email offer from Vanns where they offered the oak version of the OMD-5 for $119.88 each. I broke down and bought a pair. I wanted to try the OMD-5 in two different applications - as rear surround speakers and as desktop monitors.

How well did they work out? Well enough that I bought a second pair. 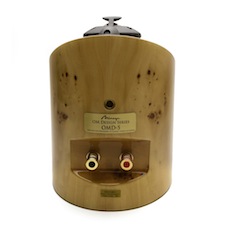 Take it from someone who routinely looks at four, five and even six-figure loudspeakers - the OMD-5 doesn't look or feel like a budget speaker. The Oak veneer is a burled wood, full of unique figuring. Even the bottoms of the speakers are slickly finished. With decent five-way binding posts, a titanium dome tweeter with a matching titanium sandwich mid-range/woofer driver and magnetically attached grill covers, the OMD-5 has a level of fit and finish that rivals what I'm used to seeing from offering min-monitors with another 0 on the end of their price-tags.

Sonically the OMD-5 is among the most open and dimensionally convincing speakers I've used on my desktop, regardless of price. When set up properly, which will be slightly wider apart than most speakers, they disappear. And I don't mean almost. Also the OMD-5 have a sweet top end that has no trace of metallic edginess that often accompanies budget-priced titanium tweeters. A good part of this comes from the tweeter's upward firing position - there's no way you can be on-axis in the tweeter's hot-zone.

In my desktop system, driven by several different amplifiers, including a Parasound A-23, Perreaux E-110, and Bel Canto Ref 1000 II, the OMD-5 proved to be dynamic and detailed yet musical. I also had no trouble blending the OMD-5 with the Velodyne DD 10+ subwoofer. And while it may seem crazy to mate a $240 pair of speakers with a $2999 subwoofer, the Velodyne delivered just the right amount of midbass energy to fill in the lower region of the OMD-5's range where its power handling, due to its cabinet volume, becomes limited.

As rear surround speakers the OMD-5 worked beautifully. With their 30/70 split between direct and reflected sound, the OMD-5 offers a very usable alternative between direct monopole and dipole surround speakers. Especially in smaller rooms where space is at a premium, the OMD-5's small footprint and diffuse soundfield makes it so they can be much closer to your ears without becoming overly directional. You can even install the OMD-5 speakers on the ceiling, upside down so they fire downwards if you have a higher ceiling. An omni-directional speaker like the OMD-5 can be the magic bullet that makes a surround system work in an undersized room.

So, if you're on a tight budget and long for a well above average $400 speaker for less than $150, do yourself a favor and look at the Mirage OMD-5 speaker. You, too, may well end up buying more than one pair...

Do you think Vann will match the $119 price mentioned above?

I don't know. But I would try giving them a call and seeing if they will match that price. Old saying, "If you don't ask, you don't get." :)

Vanns is having a black Friday sale - the rosewood version is currently $134.95 each.