Sunday I attended a presentation for the Colorado Audio Society by Andrew Jones and Chris Walker of the latest Elac products, including the new Adante stand-mounted loudspeaker. Held on a warm summer afternoon at the Crescendo Audio in Wheatridge, Colorado, Andrew Jones demonstrated how it is possible to talk about a new loudspeaker for over an hour (not counting musical interludes) and still have more to say. 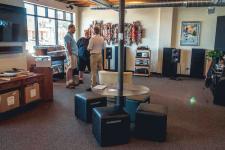 Since the star of the afternoon was the new Adante line of loudspeakers, that is what I'll write about. So far, this new line of loudspeakers from Elac has four offerings; a $2500/pr stand mounted three-way loudspeaker, a $2000 center channel three way loudspeaker, a $2500 dual 12" powered subwoofer and a $5000/pr floor-standing three-way loudspeaker. From the outside several things seem obvious, such as the fact that the Adante is a concentric design, like Elac's Un-Fi series, but there are many secrets hidden inside. Under the tweeter-midrange drivers is what appears to be an 8" driver, but it isn't! Instead the Andante uses an 8" diameter passive radiator that has an active 6 ½" woofer mounted in a separate but internally vented cabinet inside and behind the passive driver. 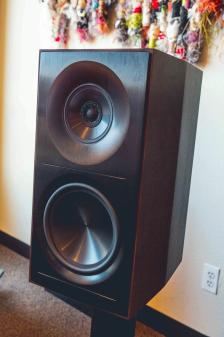 Older audiophiles and students of audio history will think of Linn and their famous isobaric woofer scheme at the mention of a woofer mounted behind an active driver. And indeed, although the Andante does employ a double chamber configuration it also employs what Jones referred to in his talk as a "bandpass" design that uses a coupled cavity with internal vents and the external passive radiator to "filter the output" to reduce distortion harmonics and vent noises in the process.

As Andrew Jones explained it, the Andante design utilizes a complex crossover that uses not only electronic components, but also the physical properties of the enclosure to achieve an overall smooth wide-band frequency response coupled with even, across its frequency range power output. Crossover points between the tweeter and midrange driver is approximately 2KHz while the crossover from midrange to woofer is 200 Hz.

Although nothing in the Andante's design is completely unique, being able to combine a coaxial tweeter/mid with a bandpass passive radiator cabinet design is new. Although not impossible to do before the advent of complex computer modeling, the latest advances in modeling enabled Andrew Jones to design a far more complicated (and successful) final result with far less trial and error than he would have been able to obtain with previously-available design tools. 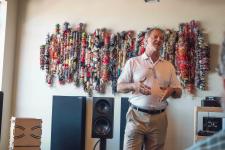 My impressions of the Andante's sound were all positive. The loudspeaker had tight, extended bass response, precise imaging, and a dynamic ease that usually is not found in such a diminutively-sized transducer. The fit and finish, even on the prototype, appeared to be sufficiently slick (and real wood) to satisfy the finish fetishists in the audience. Elac also will have matching stands for the Andante that employ a thick plate of steel for the base and can be filled with sand, shot, or my fave, kitty litter.

Official release date for the Andante series in the US is scheduled for September. I'm looking forward to the final production version. More details can be found here.