Table radios have been with us since the 1920's in beautiful wooden boxes from E. H. Scott, RCA, Westinghouse, and others. Given the popularity of a single box that can play music from an external source (like a radio station) it's no surprise that the table radio of yesteryear hasn't disappeared completely, but instead has morphed into something new, vital, and very much "au courant."

The digital "radio" of today is smaller, better-sounding and far more versatile than its forerunners. I have two models, both priced under $300, that deliver a lot of that old-time feeling with a modern twist. Usually I don't do equipment reviews in Audiophile Review, but since table radios aren't exactly The Absolute Sound's bailiwick and one speaker is at least one two few for Home Theater Review, I chose to do the reviews here.

Tivoli Audio's first design, the Model One radio was unleashed on the world in 2000. Designed by Henry Kloss, who was the K in KLH, the model one was modeled after Kloss iconic KLH Model 8 radio. The latest version, the Tivoli Model One Digital ($299 MSRP), looks very much like the original Model One and its forbearer the KLH Model 8. And like the previous models the Model One Digital can receive FM radio broadcasts, but it can also do more, including playing almost anything on your home NAS drive (no DSD, but MQA encoded files play fine.) The Model One Digital can also play files from the following streaming services - Spotify, Tidal, and Deezer, as well as anything from a Bluetooth-enabled player or smartphone. There is also one stereo analog input.

Set-up was a simple ten-minute operation - download the smartphone app available for IOS or Android, follow its instructions which involves inputting your subscription/log-in info for your streaming services and NAS drive, and you are ready to begin listening. The Model One Digital is a Wi-Fi-only device (except for the analog and the Bluetooth inputs) so if you do not have a Wi-Fi hub in your home it will be extremely limited in usefulness. Also, the app is fairly minimal when it comes to extra features - it lacks the option to use the Model One as a clock radio although it has the time prominently displayed on its front panel. It even lacks a "sleep" timer feature for lulling you to sleep, which is something that even the $59 Muzo streamer does.

The Model One strong points include a nice, easy to navigate, control interface on the app and pleasant listenable sound. Nearfield the Model One is reasonably full-range considering its size, but don't expect anything below 100 Hz. Also, as you turn it up the Model One's ability to handle bass (especially transients) diminishes. If you like your music loud, even when you are in the next room, the Model One won't keep up. But if you want musical sound at moderate volumes the Model One will be up to the task. The Model One is also ideal for someone who wants decent sounding player for background and casual listening that can access the vast majority of contemporary streaming digital music sources. It looks stylish, takes up a minimal amount of shelf space, and sounds better than most little Bluetooth speaker boxes I've heard. 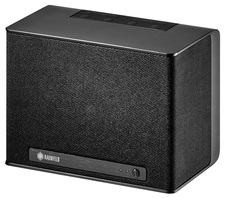 Raumfeld is a German firm whose products are focused on network-streaming. Their One S Network Streaming speaker ($249 MSRP) isn't as stylish looking as the Tivoli Model One but it has greater functionality, a better control interface app, and can play louder with fewer signs of distress, but it does lack FM radio features. One of its most useful features is that it supports streaming via both Wi-Fi AND via a wired Ethernet connection. Streaming services supported includes Spotify, Tidal, and TuneIn for Internet radio. The Raumfeld also supports local NAS drives via Plex, MinimServer, and Twonky apps on your NAS as well as a single analog input and Bluetooth. Like the Tivoli, the Raumfeld does not support DSD or MQA, but will play MQA files.

The Raumfeld control app is available for IOS or Android and is more responsive and full-featured (there's even a built-in three-band EQ) but it still lacks any timed sleep functions. Given that the Raumfeld unit itself has minimal controls (and only a couple of LEDs to let you know it's on and working) it will require access to a device that supports its app to function. This puts it at a disadvantage for technically naïve users (like your mom, maybe), because unlike the Tivoli where you can navigate through its functions via the two round knobs on its front panel the Raumfeld is a black box.

Sonically the Raumfeld is different from the Tivoli in several important ways. The Raumfeld can play louder with less distress at higher volumes. The Raumfeld also has a less musical midrange that can sound "clearer" but lacks some of the warmth and harmonic complexity of the Tivoli. The Raumfeld's bass is drier with less bloom and thump but greater control and definition. Some would call the Tivoli more "analog-like" than the Raumfled, but for others the Raumfeld's more matter-of-fact presentation will provide a more detailed and involving musical experience.